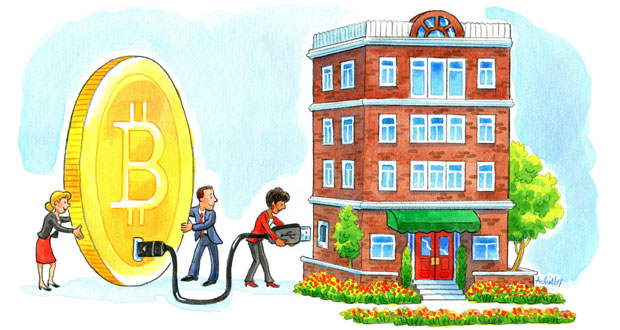 When it was launched in March 2010, the cryptocurrency Bitcoin was worth just $0.008—less than a penny. By February 2011, it had reached parity with the U.S. dollar. In December 2017, Bitcoin made global news when its value skyrocketed to $19,783. The high didn’t last, however. By mid-January, its value had dropped back down to about $9,000, and over the past six months, Bitcoin’s value continued to fluctuate, sometimes dramatically. As of June 18, a single Bitcoin was worth $6,449.99.

But what is Bitcoin, exactly? Bitcoin is the most popular cryptocurrency, which is a digital currency that uses encryption techniques to regulate the generation of units and verify the transfer of funds. There are many cryptocurrencies available, and new ones are launching all the time. Some examples other than Bitcoin are Ethereum, Ripple, Litecoin, Dash, NEM, and Monero. Cryptocurrency is not regulated by a central bank, and therefore is often regarded as somewhat controversial, but that perception is changing quickly.

Economists, investors, and other financial entities have watched the rise of cryptocurrencies with fascination over the past few years, wondering when it would begin to affect greater global economies. While your corner store may not be accepting Bitcoin as payment anytime soon, according to Antoni Trenchev, managing partner at Nexo, a company that provides instant loans backed by cryptocurrency, cryptocurrency has made the jump from a web-based novelty to a legitimate  method of payment in many industries. “With the rapid ascension of cryptocurrencies, a new class has emerged consisting mostly of affluent, millennial users. The free market has thus forced retailers and other traditional businesses to adapt and allow for payments in cryptocurrency,” he explains.

Samantha Ahuja, a partner at the hospitality and commercial real estate development and finance law firm of Morris Manning & Martin, LLC, agrees, adding that this past year has been a turning point for cryptocurrency. “You’re starting to see banks and institutions that are seen as ‘legitimate’ talk about cryptocurrencies. Goldman Sachs is starting a cryptocurrency trading desk. If you turn on CNBC, they’re tracking the price of Bitcoin. This is making it more mainstream,” she says. “There are also a lot of people talking about ICOs—or initial coin offerings—and the regulations around them. Regulatory agencies like the Securities and Exchange Commission are starting to create rules and drafting tax laws. This all goes toward legitimizing this type of currency.”

However, with legitimization come challenges. Trenchev cautions that governments may be enacting rules without understanding the consequences. “They also might not have aligned interests with crypto businesses and investors,” he says. Trenchev is for self-regulation of cryptocurrency, which he believes will help the industry adopt proper business practices and codes of conduct.

Ahuja predicts that cryptocurrency has a future in the hotel industry as a means of payment for guests as well as on the investment side of things. As far as guest payments go, Ahuja says accepting payments is simply a matter of putting the proper infrastructure in place. “There are a whole bunch of applications that allow you to take Bitcoin as a payment fairly easily,” she says. “The real issue is managing the logistics that come with this new type of currency. How do you hold it? How do you value it? What are the tax consequences?”

Then there’s cryptocurrency financing. “How hotels are financed is changing. A few years ago, everyone was talking about crowdfunding and how it was going to change how people invested in hotels. But crowdfunding wasn’t the disruptive force in the industry that many thought it would be. Now, all eyes are on cryptocurrency. It probably won’t be a major source of capital for a while, but someone will break that ceiling sooner or later,” Ahuja describes.

As cryptocurrency becomes more legitimate, a new question emerges: How does one use it to make transactions? Cryptocurrency transactions are managed through a technology called “blockchain,” a shared database that serves as a virtual, public, and permanent ledger that records transactions, both in crypto and traditional currency. “Many people don’t necessarily separate cryptocurrency and blockchain, but blockchain has many potential uses in many different industries,” Ahuja notes.

Each transaction made through blockchain is independently verified and cannot be copied, making the technology extremely secure. Ahuja sees a lot of potential in blockchain for the hospitality industry. “You can use blockchain to create more secure IDs, shoring up security within a brand’s loyalty program, as well as to track baggage or manage your supply chain,” she says. “It’s in its infancy stage, but as time goes on, I see hoteliers using blockchain to facilitate operations and enhance the customer experience. I wouldn’t be surprised to see blockchain playing a much larger role in hospitality in just five years.”

While Ahuja believes there are applications for blockchain in today’s hotel industry, she’s not sure that cryptocurrency is ready for prime time just yet. “There are good things that come from keeping up with emerging technologies, but if they aren’t stable, an established industry like hospitality will likely have issues managing their integration,” she says. “That said, it is exciting, and I think that hotels looking to be on the cutting edge of new technology are going to start accepting it soon, if they aren’t already. It’s a differentiator, and it’ll help those technology-forward properties distinguish themselves from the competition.”

Behind the Conversion Trend