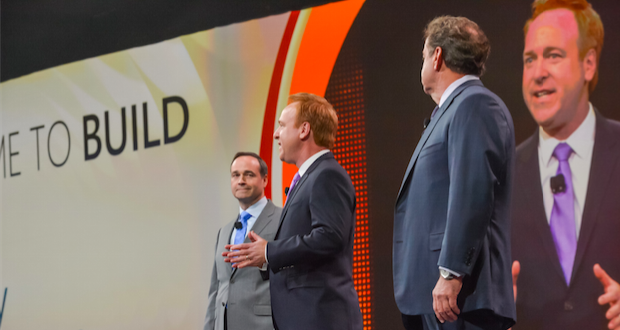 This week, approximately 5,700 Choice Hotels team members flooded Mandalay Bay Resort & Casino in Las Vegas, Nev., for the 63rd Annual Choice Hotels Convention. At the convention, where the theme was “Future Ready,” attendees were able to network, interface with Choice executives, and take in both brand sessions and educational courses to prepare their properties for what lies ahead.

Attendees noticeably emanated excitement. “This is my ninth convention and I don’t remember a convention ever being this positive or this enthusiastic,” said Steve Joyce, CEO. “It’s nice to see the culture that’s emerged for the company, but particularly how it’s emerged with the franchisees and how they interact and how they feel about us.”

The convention kicked off on Tuesday with the Corporate Business Session, which opened by spotlighting several talented children—there was a pint-sized pianist, tiny dancers, and a teenaged opera singer. “They represent all our kids, and the hopes and dreams that we work so hard for,” Joyce said. He also drew attention to the kids’ fearlessness, commenting that it is a trait that everyone should emulate as they look to the future. From there, Joyce, along with other Choice executives such as Pat Pacious, president and COO, and David Pepper, chief development officer, gave the attendees a rundown of the company’s performance over the last 12 months and talked about the initiatives on which the company would be focusing in the coming year.

Several themes emerged. The first, Choice’s intense focus on implementing cutting-edge technology in all segments of its business, particularly when it comes to booking and revenue management. “Change is a constant,” said Pacious. “Technology is constantly changing. When it comes to change, we need to be fearless, especially when it comes to the tough decisions necessary to revitalize our brands.”

One of the biggest technology pushes this year was for SmartRates, Choice’s proprietary revenue management tool. Every single brand session spotlighted the program, which has only been seeing about 30 percent daily use from Choice franchisees. Properties that use the system on a daily basis, however, tend to earn tens of thousands of dollars more per year than properties that don’t. Through demonstrations and audience participation, the Choice executives aimed to spotlight how quick and easy it is for franchisees to implement the tool. “[Our hoteliers] are small business owners and the more we can automate for them, the more time we can save them, and the better off their hotels are going to perform,” said Pacious. “Now, all [rate setting] can be automated through an algorithm.”

On Wednesday morning, attendees gathered for the marketing and distribution session, which turned attention towards Choice’s new advertising campaign, “Badda Book, Badda Boom.” Conceived and developed to increase bookings through ChoiceHotels.com and the Choice mobile app—which was recently redesigned—this campaign is meant to draw bookings away from OTAs by giving guests who book directly a lowest rate guarantee. Updating Choice’s mobile app was imperative in driving direct booking, as mobile usage rates shot up 30 percent in the last year.

This initiative also ties into the Choice Privileges rewards program, which is increasingly being leveraged throughout all of Choice’s brands. Since 2016’s convention, Choice has signed 4.6 million new members to the program. Now, the challenge is ensuring that every hotel in the Choice network acknowledges Choice Privileges member status, which has been an elusive milestone in some brands.

Another theme at the convention was continuing education, an area that Choice is working hard to build up and out. The company is introducing enhancements to its online learning system, Choice University, that will officially launch on May 17. “When you go home, make sure your staff engages with Choice U,” said Pacious. “Because the training they’ll get there will help your hotel deliver on brand promises every day.”

It also became clear during the convention that Choice is very keen on growing its upscale brands—Cambria and soft brand Ascend. Janis Cannon, Choice’s SVP of upscale brands, said, “For us to continue to grow, and for us to continue to add value for our existing customers, as well as our existing owners and developers, we needed to branch out. This is why moving into the upscale space has become such a big corporate priority.” Currently, there are 50 Cambria properties under development in the U.S. and Canada. Ascend has already opened six properties this year, with 44 more due to open before 2018.

Overall, Choice’s franchisees are enjoying another successful year. As this almost unprecedented era of hospitality prosperity continues, Joyce urged attendees to take advantage. “With the positive economy, the current lodging cycle, and long-term travel trends you just heard, if your Future Ready plans include expanding your portfolio, this is an excellent time  to build,” he said.

IHG Announces Digital Check-In for Hotels in the U.S. and Canada