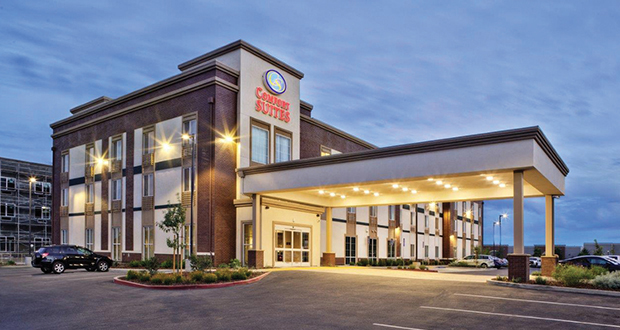 ROCKVILLE, Md.—Choice Hotels International, one of the world’s leading lodging companies, is expanding with newly developed properties in top markets around the world. The strong RevPAR performance of the company’s brands, coupled with the expansion of programs and services designed to increase franchise return-on-investment, have helped to fuel an increase in new construction activity. The company’s brand offerings, Cambria hotels & suites and the Ascend Hotel Collection, are driving Choice Hotels’ rapid expansion in urban markets. Furthermore, the successful Comfort brand transformation and the Sleep Inn brand’s fresh new construction prototype have been catalysts for expanding their pipelines across the country, given these brands have broad appeal in all types of markets.

“2016 was another great year for Choice Hotels thanks to our smart brand strategies and having the right team to execute seamlessly,” said Patrick Pacious, president and chief operating officer at Choice Hotels. “As a result, developers have taken note of our RevPAR performance as well as our success of opening new construction hotels in top markets. Our recently enhanced award-winning Choice Privileges loyalty program also experienced its strongest growth, indicating that travelers like the program and intend to return. These are just a few of our wins.”

“Developers are seeking out projects with Choice Hotels because of our proven record of innovation and deep understanding of the marketplace. For instance, we pioneered the soft brand concept with the Ascend Hotel Collection. Its success has led to both developers and independent hoteliers wanting our expertise in their corner,” said Pepper. “More importantly, new construction projects are driving Choice’s growth. This is evident with Cambria’s robust pipeline in key cities across the country, as well as the strong desire among developers to build new Comfort and Sleep Inn properties.”

The Comfort brand is experiencing all-time high guest satisfaction scores and continues to gain RevPAR Index against its competitors. Enhancements, such as taking strategic measures to help hotel developers determine the best places to build new prototype Comfort brand properties, opening up optimal markets for these projects by removing hotels that don’t fit the Comfort brand’s trajectory, elevating Likelihood to Recommend (LTR) thresholds, and establishing Comfort as the largest 100% smoke-free hotel brand across the U.S. and Canada, were all based on extensive research and analysis of consumer insights and business data.

Comfort’s steps and performance continue to draw attention from hotel developers, resulting in an increase of openings, two-thirds of which are new construction projects. These endeavors will bring the Comfort brand to travel destinations, including Miami and Jacksonville, Fla., Dallas-Fort Worth, Texas, Charlotte and Raleigh, N.C., St. Louis, MO., Memphis and Nashville, Tenn. and Birmingham, Ala.

“The Comfort brand’s success is fueled by the transformation strategy Choice Hotels put into motion three years ago,” said Pacious. “We are pleased with the payoff, but certainly not surprised. Choice Hotels have industry expertise in select service brands, and the mid-scale tier is our sweet spot. We are also seeing similar success with Sleep Inn and our Sleep Inn-MainStay Suites dual brand concept, which allows hoteliers to efficiently address multiple travel market demands– business, leisure, transient and extended stay– all under one roof.” About half of all new Sleep Inn projects signed in 2016 will be part of the dual-brand prototype with MainStay Suites.

The latest evolution of Sleep Inn’s successful prototype was unveiled at the most recent Choice Hotels Annual Convention in May and has been well received by developers for its aesthetic as well as its cost effectiveness to build and operate. Since rolling out the Designed to Dream prototype and system-wide renovation initiative in 2010, the Sleep Inn brand has delivered quality. Among travelers, guests consistently rank the brand at the top of its competitors in guest surveys, indicating that they are likely to return and to recommend the Sleep Inn brand to others.

Pacious adds, “Choice Hotels has the right strategy for continued success and growth. Dynamic brand performance helps the company meet strong demand for Choice’s offerings from both travelers and developers. As new hotels across the Choice Hotels portfolio open their doors, we look forward to attracting new customers and welcoming back returning ones.”

“Now is the time to reflect, experiment, and try new things..."