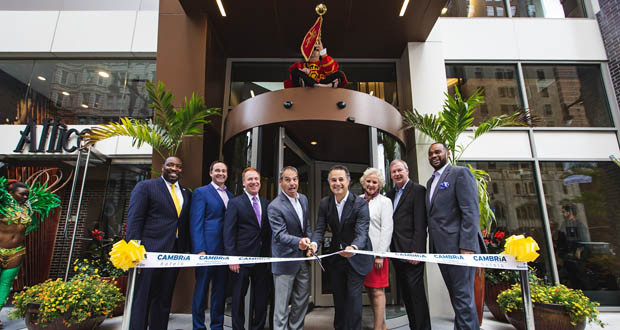 On Wednesday, June 20, Choice Hotels held an opening celebration for the Cambria Hotel Philadelphia Downtown–Center City. Though the property has been taking reservations since March, last week marked the official debut of 223-room, 15-story hotel, which is the first Cambria in Philadelphia.

The celebration was jazz-themed, inspired by the hotel’s location on Broad Street in Philly’s Avenue of the Arts District. “Our developers did such a great job bringing the true spirit of what was ‘Jazz Alley’ in the 50s in Philadelphia to the inside of our hotel,” said Jerry Rice, opening general manager of the Cambria Hotel Philadelphia Downtown–Center City. The celebration also included some live performances, as well as a raffle benefiting local Philadelphians.

The hotel features many of Cambria’s signature design elements, including spa-style bathrooms with Bluetooth mirrors that can play music, several different types of guestrooms, and locally inspired art, including art from Philadelphia-based artist Hawk Krall. The hotel also offers a fully equipped fitness center, as well as 2,500 square feet of meeting space.

On the F&B side, the hotel’s in-house restaurants offer hand-crafted food and beverage options, as well as a selection of hyper-local beer, including brews from Philadelphia’s own Yards Brewing Co. In a few weeks, the hotel will also be home to a rooftop bar and restaurant—the only one on Broad Street.

Following record tourism numbers in 2017, the city of Philadelphia is primed for new hotel properties, which not only help accommodate more tourists, but provide employment opportunities for city natives. Kenyatta Johnson, councilman for Philadelphia’s second district, also attended the celebration. During opening statements, he noted that the Cambria Hotel Philadelphia Downtown–Center City supports 60 permanent jobs for Philadelphians, and the construction of the property temporarily supported up to 300 jobs. “This Cambria Hotel investment represents all of the great things that the city of Philadelphia has been doing to move our city forward,” he said.

Pearl Properties, a full-service real estate company primarily focused on mixed-use development in the Philadelphia Metro Area, developed the hotel in partnership with Concord Hospitality Enterprises Company, a development, ownership, management company based in Raleigh, N.C. This was the first hotel project for Pearl. Janis Cannon, senior vice president of upscale brands at Choice Hotels, said that partnering with the right development and management companies made all the difference when developing in a hotel market as saturated as Philadelphia. “Pearl Properties was a fantastic partner because they were a known entity in the Philadelphia market,” Cannon told LODGING. “They had existing relationships with all of the city officials and partners we got to work with. That rapport was so important to us working together as a team, because it was their expertise in this market that allowed us to build the type of hotel that Philadelphia guests would respond to.”

Nick Kellock, COO of Concord, said that his company was thrilled to partner with Pearl Properties on this project, which is Concord’s sixth Cambria. “We knew this was an amazing project that we wanted to be a part of and we’re extremely grateful that we were chosen,” he said.

The Cambria brand has been a huge performer for Choice over the past few years, with 35 open properties and more than 100 in the pipeline. Cannon said that not only has the brand attracted veteran developers, but also people like Pearl Properties who may be new to the industry, “We’ve opened a lot of Cambrias now in major markets, which leads to more awareness. So we’re starting to attract development groups that haven’t worked in hospitality before. It’s a really exciting time.”