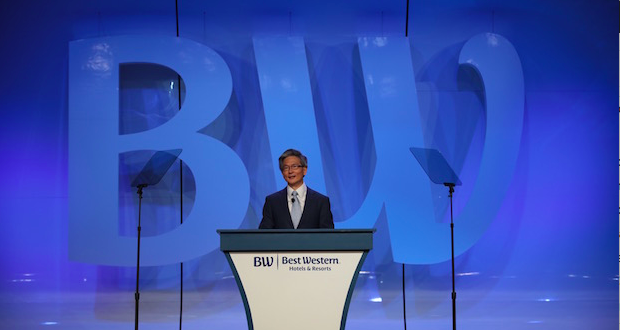 Over the past decade, Best Western has undergone an evolution. The now 71-year-old company has significantly expanded its offerings, branching out from the traditional Best Western hotel with different tiers of properties, new flags, and, most recently, a second soft brand that targets the midscale segment. And, if the vibe coming out of Best Western’s 2017 North American Convention and Global Conference, which took place November 8-10 in Nashville, Tenn., is any indication, the industry can expect a lot more innovation from the company in the near future.

The 2017’s convention theme was “Imagine,” a concept Best Western’s executives came back to again and again throughout the general session on Thursday. David Kong, Best Western’s CEO, noted that innovation and the courage to change is what keeps the best companies at the top of the pack. “When things are going well, it’s difficult to find the motivation to change,” he said. “The world is constantly evolving. If we don’t change, we will be standing still when everyone else is moving forward. We will be left behind.”

Best Western’s ambition has led to a number of bold moves over the past few years as they aggressively enter new markets, launch new brands, and pursue emerging technologies.

From a technology standpoint, Dorothy Dowling, SVP and CMO of Best Western, said that the world is currently in the midst of a digital revolution. “More and more, people are seeking out technological solutions to life’s challenges and daily routines. And this digital shift has had a powerful effect on the marketplace,” she described. “Customers now have the power to search the internet whenever and wherever they are. As a result, they are more informed than ever before, placing them in a position of power to drive the business solutions they want and expect…It’s the customer who decides who wins.” This realization has driven changes within Best Western’s approach to advertising and guest engagement. The company taps social media influencers to ensure that it is reaching potential customers on all screens.

In conjunction with the convention, Best Western also launched a new Mobile Guest Engagement Platform, which provides web-based guest communications tools pre-arrival, on-property, and at check-out without the guests needing to download an app. The platform was piloted by more than 350 Best Western properties, which reported that the platform led to a significant increase in guest satisfaction, overall, experience, and even increased room revenue through upselling and advertising. “In a world of technology, texting, virtual reality, artificial intelligence, and augmented reality, technology will continue to change the way we do business,” said Ron Pohl, Best Western’s SVP and COO. He then added, “However, [with these innovations], we have fewer opportunities to interact with our guests so we must take full advantage of them.”

These initiatives have had a resounding impact on Best Western’s business over the past several years. The company’s guest satisfaction scores have been on the rise for 11 years straight. They have a pipeline of more than 530 hotels across all brands around the world. Moreover, 35 percent of that pipeline is being developed by existing Best Western members who wish to add more Best Western product to their portfolios. Pohl noted, though, that the company isn’t resting on these accomplishments and that one of its key initiatives in 2018 is to expand Best Western’s development team to significantly increase the pipeline of new properties. Pohl urged attendees to consider developing more Best Western properties, “We need to develop more hotels in primary and secondary markets, so why not be the developer in your market? You now have eleven brand choices, choose one that fits in a market of your interest,” he said.

Best Western’s executives also talked at length about the responsibility of the hotel industry to give back to the community, especially in the wake of recent disasters such as Hurricanes Harvey, Irma, and Maria, the earthquakes in Mexico, the wildfires in California, and the mass shootings in Texas and Las Vegas. Best Western Chairman, Terry Bichsel, noted that the company’s commitment to charitable endeavors had resulted in over $1 million in giving to help people in need, provide educational scholarships, and help organizations such as the Red Cross in 2017. “Giving back is at the core of who we are,” he said.

Despite the company’s 70+ years in the industry, it was apparent at Best Western’s convention that the company approaches hospitality like a scrappy newcomer, always looking for opportunities to innovate and grow. And, at the conference, the company proved that it has no dearth of imagination. “We have had an exciting resurgence at Best Western in the past few years, all as a result of us honoring our past and reimagining our future together,” Kong said. “Anything meaningful begins with imagination.”

Hotelbeds Announces Collaboration With The Leading Hotels of the World