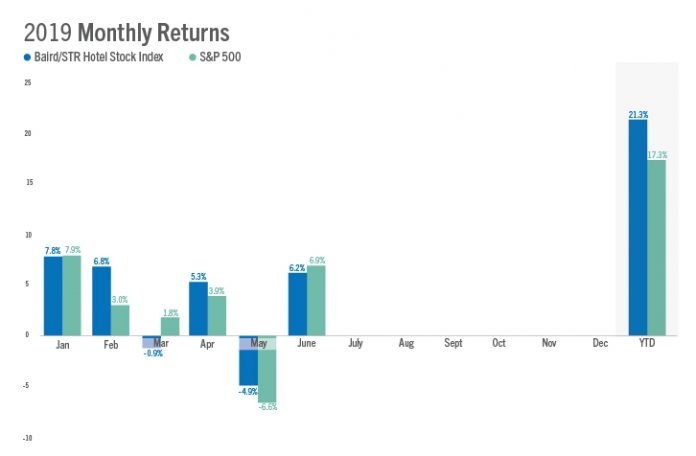 “Hotel stocks continued their up-and-down performance this year with better results in June after a tough May,” said Michael Bellisario, senior hotel research analyst and vice president at Baird. “The broader stock market rebounded in June on optimism about a trade deal and that lifted the hotel brands more than the hotel REITs, although both sub-indices still were relative outperformers during the month. However, RevPAR growth expectations remain fairly muted heading into the second half of the year.”

“Investor sentiment around hotel stocks would appear to have been more aligned with the overall trading market as opposed to industry performance in June,” said Amanda Hite, STR’s president and CEO. “In this case, that is good news because RevPAR growth for the first few weeks of the month hovered just above the 0 percent mark, and despite very healthy demand increases nine years into the upcycle, hoteliers do not seem to be able to capitalize on full hotels. We know that new supply in the limited-service sector, especially in the Top 25 Markets, has led to the softening of occupancy performance, but even in the case of strong occupancy, pricing power seems to be elusive. We expect the second half of the year to be better, but overall, RevPAR performance is slow across all classes and regions.”

While the Baird/STR Hotel Stock Index fell slightly behind the S&P 500, which was up 6.9 percent in June, its performance exceeded the MSCI US REIT Index, which was up 0.7 percent.