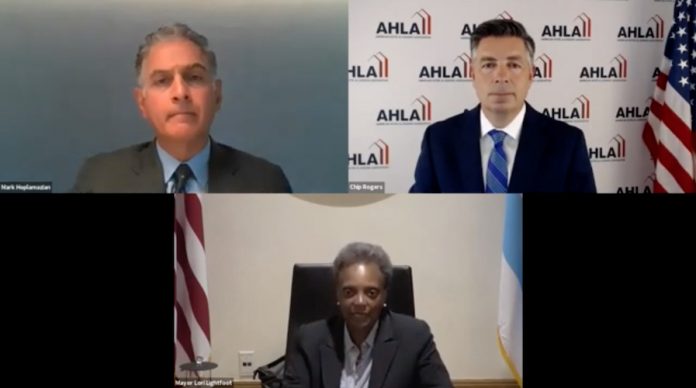 On Monday, President and CEO of AHLA Chip Rogers led a conversation on leadership, diversity, and community support with President and CEO of Hyatt Hotels Corporation Mark Hoplamazian and Mayor of the City of Chicago Lori Lightfoot. To start the conversation, Rogers said, “If there’s one thing you need in a crisis, clearly, it’s leadership. And Americans are looking for leadership, whether it’s in their families, in their communities, in their jobs, or among their elected officials.”

Having a vision also helped Hyatt throughout the pandemic. Hoplamazian agreed with Lightfoot and said that having a “phenomenal team” helps to manage crisis situations. He continued, “At Hyatt, the other dimension I would say that served us extremely well and has been essential is our own purpose. That is a higher purpose we aspire to, which is to care for people so they can be their best. And that purpose has actually been our guiding light, our North Star, as we manage through what has turned into a significant adjustment of reduction enforced in our business and also many other steps that we had to take in order to ensure that we have a long future.”

One of Lightfoot’s goals for Chicago is to increase the population. However, the virus has attacked people with compromised immune systems and underlying conditions—lowering populations of vulnerable communities due to people leaving the area as well as from the virus. Lightfoot is investing in vulnerable neighborhoods to give the community “a sense of hope, a sense of ownership.” She continued, “What the pandemic I think really showed us is the areas that we were most vulnerable were actually the areas we needed to lean into and develop more expeditiously.”

Hoplamazian, like Lightfoot, is investing in underserved communities. Hyatt is planning on employing 10,000 opportunity youth by 2025, even with the setback of the pandemic. He said, “We as an industry have many entry-level jobs that allow us to bring in people and give them a career opportunity to train and learn and advance.”

But what all communities need now, Lightfoot said, is “hope.” She continues, “They want leadership that inspires them. They want to feel like progress is being made. They absolutely want to feel like their leaders understand their daily struggles, and I think that is a continued incentive but also an opportunity for us as leaders to make sure that we’re listening, that we’re learning, and that we’re moving forward.”

Hoplamazian adds that the “proximity and emotional sense of connectivity is both going to propel people to get back on the road and see their relatives and friends, but also, it’s going to help society at large. I think this is the heart in which people are engaging with one another is incredible and magnificently inspirational.”