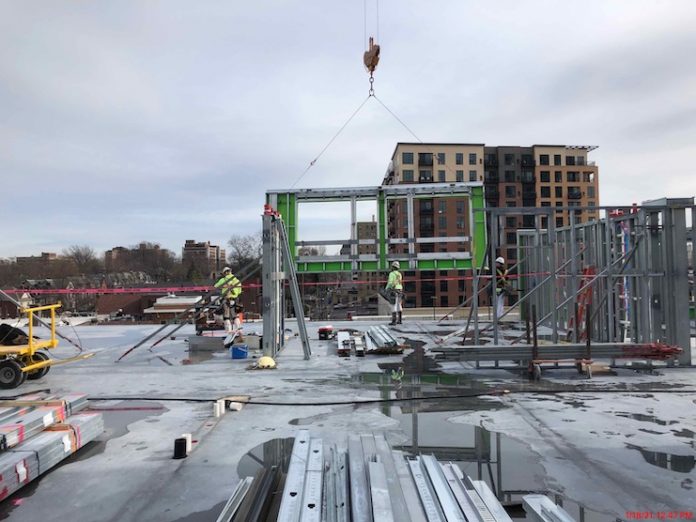 St. Louis — The upcoming AC Hotel St. Louis-Central West End, a seven-story, 192-room hotel located at 215 York Ave. in St Louis that is one of the Central West End’s first hospitality projects in nearly 20 years, is set to open by the fourth quarter of 2021.

Midas Construction is the general contractor for the $26.4 million construction project. Developers of the AC Hotel St. Louis-Central West End include Concord Hospitality, Koplar Properties, and Homebase Partners. The hotel’s site is the previous home of the KPLR TV station, which was demolished in December 2019.

Eisen Group is providing structural wall panels for the hotel; the Eisen panel and truss system allows for mechanical, electric, plumbing, and fire protection trades to accelerate their schedule with prefabricated materials.

In addition, Midas has partnered with the City of St. Louis to provide work access to York Ave. in its entirety for the term of the major project activities.

“We have assembled a local team of prefabrication and installation experts to ensure the overall success of this project,” said Chris Shinkle, Midas Construction president. “The AC Hotel is a welcome addition to both St. Louis and the Central West End area, and we are proud to lead this group in creating a select-class hotel experience of comfort and elegance.”

Shinkle added that, despite the current pandemic, Midas Construction had an “extremely busy 2020 in St. Louis that included building the Aloft Cortex in the Cortex Innovation Community and Element by Westin in midtown St. Louis.”

The AC Hotel St. Louis-Central West End is within walking distance to more than 100 restaurants, bars, retail shops, and entertainment venues. St. Louis’ Central West End is a mixed-use district bordering on the approximately 1,300-acre Forest Park located in the heart of the city.

The AC Hotel brand has more than 174 open properties and 134 in the pipeline.