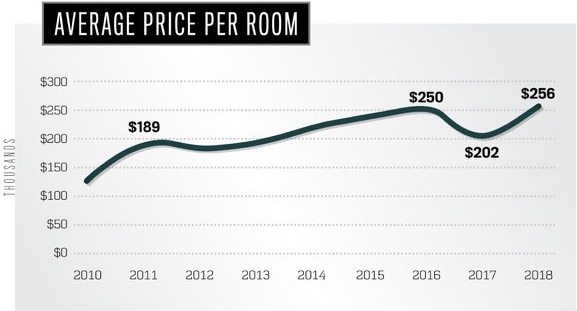 According to STR, 2018 was one of the best years in recent history for hotel transactions. With 707 transactions, a 25 percent increase since 2017, last year saw the largest number of transactions this lodging cycle. Not only was this a great year for transactions in terms of activity, but with over $29.5 billion in hotel transaction volume, this was the second-highest year since STR began tracking this data in 2000, and only slightly behind the previous peak of $29.8 billion in 2006. The 2018 volume of $29.5 billion was nearly 50 percent greater than the 2017 volume.

For a partial explanation of this growth, STR looked at the average price per room, also sometimes referred to as “price per key.” The average price per room grew more than $50,000 in 2018, reaching an average of $256,000. The 2017 price per room fell $47,000 from the previous year, so when comparing the 2016 figure to 2018, there’s a modest growth of 2.4 percent—much more in line with what has been seen throughout this cycle.

The 2017 dip was more of an anomaly than an indication of decreasing hotel value. This drop-off in price per key in 2017 was due to a large number of portfolio sales (approximately 21 percent of all sales), and many of these portfolios consisted of lower-tier properties, thus lowering the average price per room. Another factor that drove down the price per key in 2017 was that the majority (63 percent) of transactions occurred outside the Top 25 Markets, where prices are typically lower. All that said, there was a healthy rebound in 2018 highlighted by five properties that sold at over $1 million per room.

While portfolio transactions weren’t as common as in 2017, a total of 200 properties across 13 portfolios were sold in 2018. The largest portfolio sale in terms of properties was by ARA Asset Management, which purchased 38 Hyatt Place and Hyatt House properties from the Lone Star Funds for a total of $700 million (roughly $141,000 per key). Those were not the only Hyatt properties to change hands last year; Hyatt Hotels Corporation sold three properties to Host Hotels & Resorts for $992 million, which was the highest-value portfolio deal of the year.

However, the biggest seller of 2018 was Extended Stay America, Inc., which sold 57 properties in three separate portfolio sales.