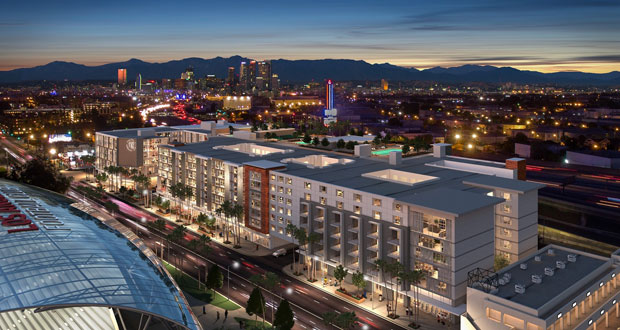 In addition to a 298-room dual-branded hotel, the seven-story project will include approximately 408 residential units for 931 student housing, market-rate, and affordable residents. The project will also have over 74,000 square feet of commercial space including creative office space and numerous destination retail and outdoor dining establishments.

“The Fig will serve as a multigenerational staple in the overall fabric of the USC/Exposition Park submarket of L.A. by creating more housing and providing neighborhood-serving hospitality, office, and retail destinations,” says John David Booty, executive vice president of Ventus Group. “We have raised a total of $32 million in capitalization to date to assemble, entitle, and design a one-of-a-kind destination, which will deliver long-term value to investors. We are now launching a search for joint venture equity partners to build-out the project.”

The Fig is a passion project for Booty, who was a two-time Rose Bowl-winning USC quarterback who went on to play in the NFL with the Minnesota Vikings, Tennessee Titans, and the Houston Texans, as well as his colleagues at Ventus Group, seven of whom are USC alumni.

“A project of this scale and caliber, especially in the land-constrained USC submarket, takes true skill and deep market expertise,” says Booty. “As USC alums returning to invest in our home turf, our knowledge of the market is evident. We bring a hyper local focus, which will allow us to deliver a project the community truly needs, resulting in long-term demand and economic returns for our investors.”

Located near the USC campus and the new $700 million USC Village project, The Fig will be the second largest mixed-use development in the area, anchoring the southern gateway to the USC campus and bringing the community and the university together, according to Booty.

“The USC campus and Exposition Park are in the midst of a tremendous revitalization, with a long list of major projects and capital investments underway,” he explains. “The Fig will complement USC Village and numerous other major developments, integrating into the local community to further compliment the region as a world-class university and tourist destination, attracting alumni, students, area residents, visiting families, sports fans, museum-goers, L.A. visitors, and the like.”

Other major developments/redevelopments underway in the USC/Exposition Park submarket include: the $1 billion, 300,000 square-foot Lucas Museum of Narrative Art by George Lucas; the $270 million renovation of the Los Angeles Coliseum; the $250 million development of the LAFC/Banc of California Stadium with up to 40,000 seat capacity; the modernization and expansion of the Natural History Museum; the Figueroa Corridor Streetscape project, which will improve transit and pedestrian access throughout the area; and various additional developments and capital improvements to prepare Exposition Park for the 2028 Olympics.

“At Ventus, we focus on projects in irreplaceable locations that we can hold for the long-term. The Fig is that project,” says Booty. “This development will benefit from the significant economic growth underway at USC, and will be a cornerstone in the transformation of the area.”

The Trend Toward Mixed-Use Properties

Thompson Seattle Set to Open in 2016

Adaptive Reuse Project in Atlanta to Include Hotel Indigo