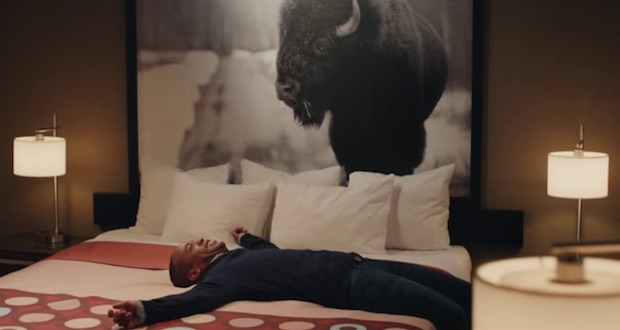 PARSIPPANY, N.J.–Super 8, a part of Wyndham Hotel Group, just launched a multi-million-dollar ad campaign that takes a comical look at U.S. “road trip fails” while showcasing the brand’s newly redesigned rooms. The campaign—called “See You on The Road” and created by independent agency TERRI & SANDY for television, radio, digital, and social—highlights more than $100 million in nationwide renovations, with updates ranging from new flat-screen TVs to local photography replacing guestroom artwork.

While road trips are often portrayed in media as adventures with scenic views and family bonding, Super 8 took a different approach in the new ad campaign. Inspired by the social media hashtag #RoadTripFails, the brand’s four 15-second anchor ads show how families and friends traveling together often hit a few bumps along the way.

“It was born from the truth that some of the funniest and most memorable moments on the road are the blunders,” says Terri Meyer, co-founder and CEO of TERRI & SANDY. “We wanted our consumers to know that ‘We get it!’ and that Super 8 is the perfect refuge for those seeking a haven from the highway.”

The roadtrip hiccups in the ads include a toddler needing a bathroom break, a stare-down with a lone bison, a too-close encounter with a teen in need of a shower, and a roadtrip selfie gone wrong, all ending with the travelers finding relief and rest in a Super 8 room and the trademarked line—“At Least Tonight Can Be Super.”

Lisa Checchio, vice president of Brand Marketing at Wyndham Hotel Group adds, “Super 8 is a trusted, tested companion for every traveler out there and this campaign serves as an authentic platform for not only showcasing our fully updated, redesigned rooms, but connecting with them in a way that is both humorous and relatable. We’re tapping into emotional territory for travelers while simultaneously showing them we’re not their grandfather’s budget motel.”

The spots debut today across major cable networks like TBS, HGTV, Food Network, and CMT, as well as digital platforms. Expansion across radio and social is anticipated in the coming weeks.

Super 8 now has more than 2,800 locations around the globe, more than any other economy lodging provider, and nearly 1,800 North American hotels.