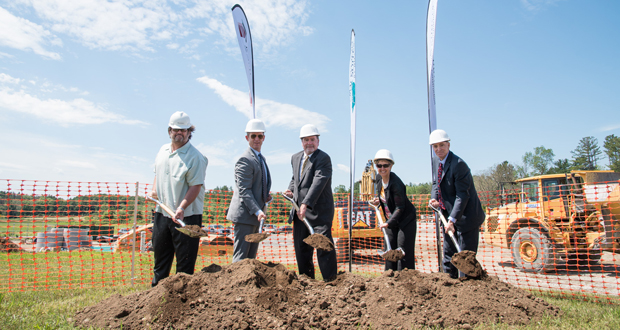 WILTON, NH–Members of Roedel Companies were joined by representatives of the Riverbridge development and Hilton Worldwide to break ground on the Homewood Suites at Riverbridge in Berlin, Mass. Construction of the hotel, which is expected to open in 2018, is already underway. The hotel is a central component to Riverbridge, a mixed-used village on a 114-acre property adjacent to the Solomon Pond Mall. This is the 11th hotel owned or operated by Roedel Companies.

Chris Senie, president of Riverbridge, said Roedel Companies was sought out to be the hotel builder and operator after an extensive search. This is the first time Roedel Companies has worked with the Connecticut-based real estate developers. “We were excited when Chris and Matt Senie approached us. It’s a great project to be part of,” says David W. Roedel, business development officer for Roedel Companies. “We love the location and the proximity not just to the Solomon Pond Mall, but also the New England Sports Center.”

The new Homewood Suites by Hilton is a joint venture between Riverbridge North and Roedel. The 80,000 square foot, 105-room hotel will have one-bedroom, two-bedroom, and studio suites, each containing a fully furnished kitchen and full-sized refrigerator. The Homewood Suites by Hilton will offer free high speed internet access, a business center, workout facility, and pool. A complimentary hot breakfast will be available to guests, while dinner and drinks will be served every weeknight to hotel customers.