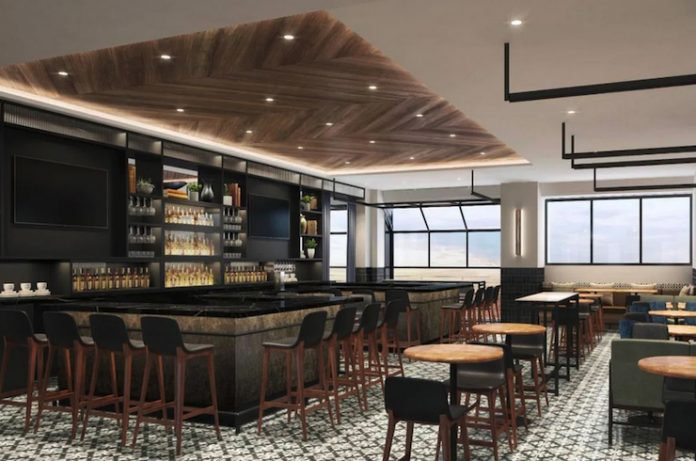 KNOXVILLE, Tennessee—Rockbridge announced the opening of the Marriott Knoxville Downtown, located at the World’s Fair Park. The 302-room, full-service hotel has undergone a near full-property renovation. The property is also unveiling the Maker Exchange—a gathering space, artistic showroom, and culinary scene designed to show Knoxville’s creative maker community. Rockbridge, also the owner of the neighboring Tennessean Hotel, led the renovation.

Rockbridge purchased The Tennessean and the adjacent hotel with the vision of transforming the venue into a hub for Knoxville. The property was developed for the 1982 World’s Fair.

“The hotel is ideally located at the center of World’s Fair Park, the Knoxville Convention Center, the University of Tennessee, and the downtown district,” said Jim Merkel, chief executive officer, Rockbridge. “We are proud to reinvent this destination for the community.”

Located in the Maker Exchange, Marriott Knoxville Downtown includes a Hearth Room with an oversized fireplace, an independent restaurant, and a bar offering a gastropub with food, craft cocktails, and neighborhood brews; a local, independent coffee shop, the Curio; and meeting and event space.

“Our goal in this development was to bring the vibrancy of the World’s Fair history back to the neighborhood,” said Merkel. “Maker Exchange, positioned between the two hotels, provides a point of connection for Knoxville’s maker community, for locals who support them, and hotel guests who are drawn to the diverse flavor of the work on display.”

Hotel development company RBHD led the hotel renovation with a team including architect McCarty Holsaple McCarty, construction manager Blaine Construction, and interior design firm Stonehill Taylor. The Great Room has a woodgrain feature wall while a double-sided fireplace with seating in the hotel lobby brings visitors further into the reception area. Each of the 302 guestrooms have views from floor-to-ceiling windows and all offer either single king or double king accommodations. Furnishings contrast dark and light wood tones, and dark blue carpets feature textures reminiscent of glassmaking tools and patterns. Sconces and soft goods designed by textile artists introduce craft elements.

Rockbridge is working with Robin Easter Design to create the 12,000 square foot Maker Exchange space and has brought in Knoxville’s Dogwood Arts Alliance to bring the concept to life and connect with the maker community.

Aimbridge Hospitality will operate the new hotel, alongside its sister property, The Tennessean Hotel.