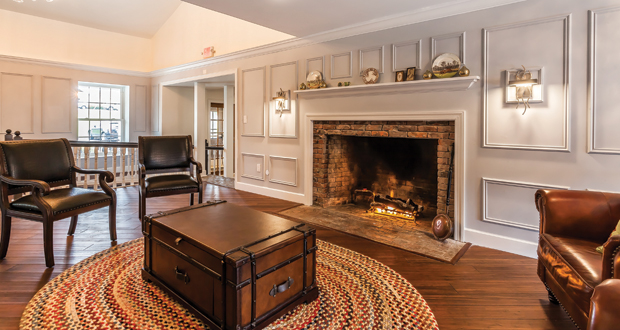 A Western-Reserve landmark that originally opened in 1927, the historic Aurora Inn in Northeastern Ohio recently concluded a three-year renovation. The hotel and event center, which is member of Choice Hotels’ Ascend Hotel Collection, officially debuted its extensive renovations this past October. It was a landmark occasion that also celebrated the property’s 90th anniversary.

The transformation was designed and inspired by New York-based celebrity designer Genevieve Gorder, who is known for her media presence on HGTV. Through Gorder’s work, the Inn has maintained its historic charm while integrating modern finishes to guarantee the comfort of today’s savvy travelers.

At the time of its opening in 1927, the Aurora Inn posed as both a “pleasant pause” and an intimate gathering place for travelers. The hotel has hosted many celebrities over the years, including Rosemary Clooney, Paul Newman, and Richard Nixon. Despite Aurora’s historic and dramatic history, the property lost some of its luster over time. After a fire burned most of the hotel’s structure to the ground in February 1963, the Aurora was rebuilt with a more efficient, fire-proof structure comprised mainly of concrete and steel. 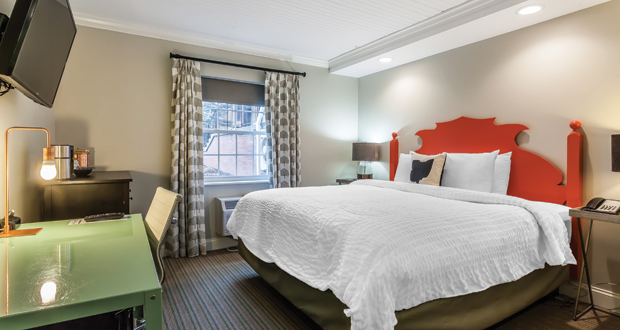 “One of the reasons our company decided to take on this project was because of the building’s unique architectural design,” Stephen Mansfield, managing member of the property’s ownership entity, Aurora Hotel Partners, LLC, explains. “Knowing that it was a place that needed to be reclaimed both for historical purposes and for the proud citizens of Aurora really inspired me to move forward with the undertaking.”

After Aurora Hotel Partners purchased the property in April 2014, they decided to keep the hotel open while the work was being done. “We never fully closed. We would close down specific areas of the hotel, blocking off a few hallways here and there as we moved from section to section,” Mansfield describes. “But most of the rooms, the pool, and the front lobby remained open throughout the entire process. It wasn’t easy.”

The result of all the hard work is a refreshed space that exudes an atmosphere conductive to the same hospitality and friendly encounters that made the Inn renowned nearly a century ago. The lobby features the hotel’s original brick flooring and oversized fireplace, while ceiling beams, doors, frames, and crown molding have been restored. The design scheme captures shades of white, grey, black, and off-black alongside pops of vibrant color. The renovated Inn also has two restaurants: Six Horse Tavern and The Cutting Board.

When asked what his favorite part of the renovation was, Mansfield finds it hard to choose. “You come across things you don’t expect, whether it’s opening up a wall and finding something unique or planning for one thing and ending up having to go a different route,” he says. Between the reclaimed chandeliers in the ballroom to the discovery of several salvageable portions of vintage wallpapers, which have since been restored, much of the hotel’s renovation was rooted in uncovering years of remodeling.

But the most valuable discovery to come from this experience had to be the collaboration demonstrated by Mansfield’s team. “It just goes to show how much you can accomplish with dedication and support,” he says. “Working with Genevieve, our architects at Aodk, Inc., local city and county officials, combined with the incredible support of the community and, of course, tireless backing from my family, made this project an unbelievable experience. Together we all brought a missing piece of history back to Aurora.”