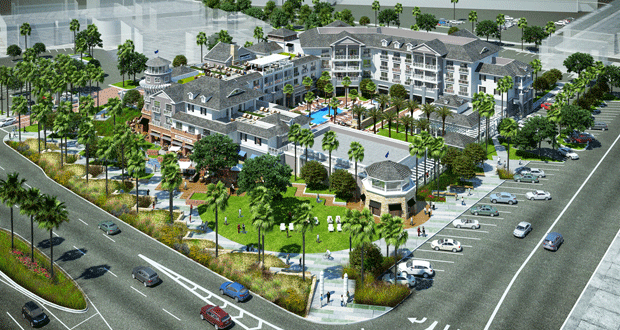 Located next to Lido Marina Village at the gateway to the Balboa Peninsula, Lido House Hotel will play an instrumental role in the renaissance of this integral center of Newport Beach’s rich history, striving to become an iconic landmark for the idyllic community. The property will be part of Marriott International’s Autograph Collection.

The interior décor by Novato, California-based EDG will showcase the lifestyle, history and culture of Newport Beach. Designers promise to incorporate splashes of Newport Beach history, including pop art renderings of John Wayne and a cleverly repurposed City Hall shield. Guests will be exposed to Newport Beach’s sunny weather, even from within the hotel’s interior atrium, via two roof-top skylights. Lido House Hotel will also take advantage of local talent via custom design for the property’s five two-story Balboa Suites, which will be individually designed by locally based interior designers.

The four-story, 103,000-square-foot hotel is designed with a room mix that includes 124 standard guest rooms and six luxury suites with outdoor patios, including one presidential suite, two executive suites, and the five two-story Balboa Suites. All guestrooms will include wood flooring and wainscot detailing, with guest baths featuring Waterworks plumbing fixtures, tiled floors and showers, and quartz countertops.

The new hotel will offer a variety of amenities to accommodate the needs of guests, as well as local businesses and the community. The property will feature 4,000 square feet of meeting rooms, a ballroom and events lawn, a saltwater pool with television- and data-equipped private cabanas and a brick monument fireplace, a high-end fitness center, and Boost, the hotel’s luxury spa. Lido House Hotel’s exterior amenities will also include an exterior courtyard along Newport Boulevard, which will feature a beachy, plank-style walkway and ipe decking to surround the celebrated ficus trees, which previously distinguished the former Newport Beach City Hall property.

Lido House Hotel will offer an upscale dining experience through its full-service restaurant, the Mayor’s Table, serving up “Pacific pub-style” culinary offerings for breakfast, lunch and dinner. The Mayor’s Table’s ground floor location will be flanked by steel windows and doors and a full-brick exterior wall and include patio seating along Newport Boulevard with fire pits for guest to enjoy while dining and people watching. Top Side, the property’s ipe wood rooftop deck and lounge, will provide guests with fire-side seating options and ocean views.

“We are proud to be a part of a project that will offer such fun and meaningful assets to visiting guests and Newport Beach locals alike,” said Bill Wilhelm, president of R.D. Olson Construction. “Lido House Hotel is a special project because it will truly give visitors the feeling that they are living as Newport Beach locals, while delivering the comfort and relaxation of vacation to community residents who stop in for a meal or a spa treatment.”

Construction of Lido House Hotel is planned for completion in summer 2017.