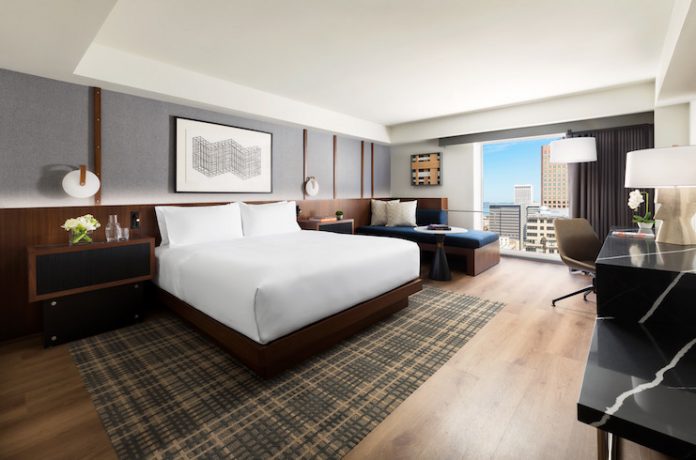 SAN FRANCISCO—The hotel currently known as the Park Central Hotel has announced that the hotel will undergo an extensive redevelopment and rebranding and emerge as the Hyatt Regency San Francisco Downtown SoMa, offering guests a dynamic San Francisco hospitality experience.

The comprehensive redevelopment, slated to be completed by the end of 2021, will include the addition of a lobby bar and grab-and-go marketplace, room refurbishments and upgrades, five new guestrooms, an upgraded 3,200 square foot fitness studio with gym equipment, and redesigned meeting and event spaces named after local artists, all marked by contemporary décor and an art-driven narrative envisioned by design firm BHDM.

Additionally, the hotel will add a Regency Club—an experience tailored to meet the needs and expectations of global travelers—located on the hotel’s ground floor. The private club will be open 24 hours a day and feature amenities that include locally inspired food and beverage offerings, evening drinks and hors d’oeuvres service, and a dedicated host to provide assistance.

The Park Central Hotel currently offers 681 guestrooms and suites, including a variety of city view and bay view rooms, 20 executive corner suites, and two presidential suites. The hotel has some of the most expansive views of the city and the bay, providing guests with a signature San Francisco experience. When the expansion is completed, the hotel’s refurbished guestrooms will increase to 686. The residential design of the rooms combined with décor and natural light conveys the feeling of retreat. Large bathrooms provide generous counter space, walk-in showers, and San Francisco-based Pharmacopia bath and body products.

In walking distance from the city’s museums such as SFMOMA, the Asian Art Museum, MOAD, and the Contemporary Jewish Museum, Hyatt Regency San Francisco Downtown SoMa will celebrate the local arts community by displaying pieces in the hotel’s public gathering spaces and by naming meeting and event spaces in honor of Bay Area artists. With almost 30,000 square feet of flexible meeting and event space, including 16 function rooms, two ballrooms, and several breakout rooms with floor-to-ceiling windows, the hotel can host larger conferences and events than many other properties, contributing to San Francisco’s re-emergence as a convention destination.

The Charleston Place to Undergo Transition and Transformation