Home Industry News Advocacy Opportunity for All: Don Peebles on Changing the Face of Decision-Makers in... 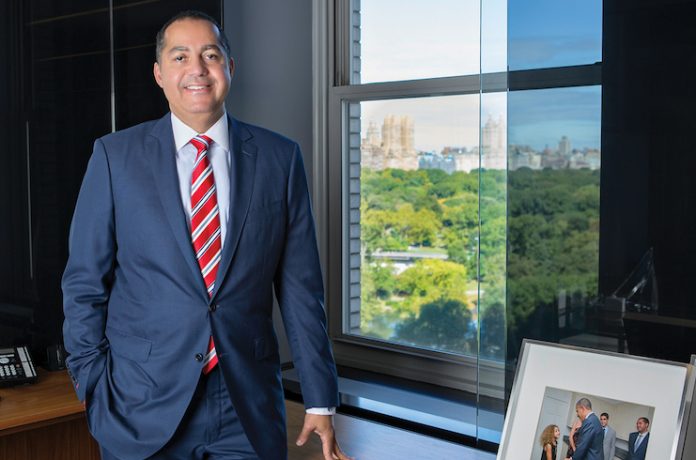 Don Peebles, who heads the national real estate investment and development company Peebles Corporation as chairman and CEO, has been a champion of diversity and inclusion in the hospitality industry for more than 20 years. He recently described for LODGING how he “accidentally” got into hotel development, the trademarked “Affirmative Development” method he practices in his own company, and his thoughts on how other hotel development leaders can support diversity and why they should.

Peebles reiterates the common characterization of the hotel industry as a land of opportunity, where a worker can rise from its lowest to highest ranks without a fancy pedigree. “One of the great things about the hospitality industry is you can start off at the front door or the front desk,” he says, adding, “That upward mobility has been there since the inception of the industry—that is, unless you were a woman or person of color.” He cites the example of his own grandfather, who, despite having a college degree, remained a doorman for 41 years at the Wardman Park Hotel in Washington, D.C., commenting, “The upward mobility wasn’t there for him”

Peebles considers himself lucky to have entered the industry at a very different time—after civil rights strides made in the 70s and 80s had taken hold—and somewhat by accident. “After purchasing a vacation home in Miami in the mid-90s, I read a newspaper article about a request for proposals (RFP) for the development of an African American-owned hotel. After my bid won, mine became the first major hotel in the country to be developed by an African American,” he recalls.

The Role of Advocacy

The RFP that kick-started his hotel development career in Miami was not itself an accident; it was the result of an NAACP-led, nationwide boycott of Miami-Dade County’s convention and tourist industry.

Peebles says that and other organized efforts to diversify the hotel industry in terms of economic empowerment did not include everyone; it focused almost exclusively on African Americans. “We had an advocacy group—the NAACP in the civil rights movement structure. Its Economic Reciprocity Initiative, which began monitoring the diversity and monitoring business development performance of the lodging industry in 1997, has the hospitality industry clamoring for African American franchisees, executives, etc.”

Peebles observes there has not yet been a similar advocate for economic empowerment for women. “Even today, the discussion related to women is basically about fundamental civil rights—such as the right to go to work and not be harassed—not economic opportunity for women,” he notes. As Peebles sees it, just as the efforts of the NAACP were able to demonstrate the ability of Black Americans to disrupt tourism in Miami-Dade County through its boycott, women could very well organize to follow their example. “I don’t think change in the industry will come until women push for it. If women said, ‘We’re going to start deploying our dollars to hotels that are creating an environment of economic opportunity and fairness,’ the industry would change quickly.”

Changing the Face of Decision-Makers

Peebles says the goal of achieving a more equitable environment for developers can best be reached by changing the face of “those who set policy and who implement and deploy their company’s capital or their company’s opportunities” to more closely align with the general population. Unfortunately, he acknowledges, “It isn’t enough to rely on the good intentions of those decision-markets, who represent a shrinking portion of our population,” explaining that it can be difficult to convince them to hand over economic power voluntarily in the name of diversity. This, he says, is because unlike civil rights—which are a matter of law and human decency—those who hold economic power are often loath to relinquish something they believe they have earned, albeit in a system that may be unfair and systemically discriminatory.

Peebles does make a case for transformation that has less to do with altruism than self-interest, asserting that there are good business reasons for decision-makers to actively strive to diversify their ranks, including access to a more talented workforce and holding development decision-makers accountable to those who actually generate a large part of the capital they deploy. Peebles takes pride in his company’s Affirmative Development approach, saying, “We as business people who want to be efficient and effective—and, of course, successful—end up with better talent and a better product when we use a broader lens to search for talent.” He says, too, that Peebles Corporation is intentional about including women, who, as he noted previously, have been largely overlooked in economic empowerment advocacy. “I have made it a point in our company to look for women as entrepreneurs, consultants, and advisors to be a part of the projects that we develop.”

Saying companies should be held accountable to the diverse populations they serve and employ, Peebles also hints at the economic power people of color and women—who generate a large part of the capital they deploy—could leverage. “Most hotel development projects—especially the larger ones—are heavily capital intensive, and the equity comes from private equity. There’s almost $70 trillion in private equity and venture capital, and less than 1.3 percent of it is invested in firms run or owned by women or people of color combined—even though the biggest investors in private equity are public employee pension systems and the majority of the people who pay into government employee, public pension systems are women.”

Peebles sees the devastation wrought by the pandemic as an opportunity to begin working toward the changes he supports. “One of the most important things that we need to recognize as we’re coming out of COVID is that it’s going to take all the talent we can gather to rebuild our industry.” Peebles references President Biden’s motto, “build back better,” saying, “To me, this means building back with more inclusiveness, making our industry and the opportunities around it reflective of the population’s demographics at all levels.”

He therefore calls on the industry to take a broad view of the status quo and make changes accordingly. “I think the country is running out of patience with the extreme wealth and income disparities—a burden that is disproportionately carried by women and people of color. As an industry, we need to step up and recognize that we’re in this environment of opportunity, and we need to open up those doors.”

Don Peebles, Peebles Corporation’s chairman and CEO, maintains diversity is good for business, so he practices what he preaches through his “Affirmative Development” method, which he describes as development that creates broad economic opportunities. “We feel that we can build better buildings and we can create better environments if we include everybody in that opportunity,” he says.

Peebles says it all comes down to fairness. “Affirmative Development for us is taking these aggressive, affirmative steps to open up the doors of opportunity to make our system fairer, and it needs to make our buildings and environment fairer, too.”