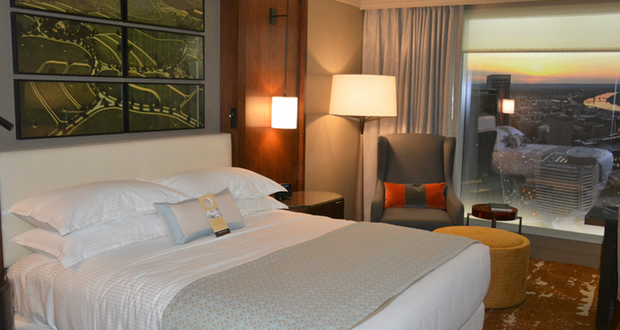 LOUISVILLE, Ky.—A glimpse into Omni Louisville Hotel’s model guestrooms reveal designs influenced directly from the architecture, industry, culture, and hospitality of the city—everything from the hues of bourbon to the iron building façades of Whiskey Row.

Each Omni property is individually designed to reflect the local culture of its city, and Louisville is no exception. The hotel, set to open in spring 2018, distills the essence of Louisville’s warmth and hospitality, while embracing and celebrating the city’s authentic quality and charm. The model guestrooms, built inside the Odd Fellows building next to the hotel site, showcase the look and feel of the Omni Louisville rooms.

Laura McKoy, Omni’s creative director and vice president of interior design, grew up in Paducah, Ky. and had a sense of Louisville’s personality. “What sets Louisville apart from other cities is its visible progressiveness combined with a deep appreciation for its history. As a Kentucky native, I wanted to emphasize that combination of past and present,” said McKoy. “We kept coming back to the term ‘crossroads’ as we considered our room design. We saw how Louisville’s future—new buildings, new industry, new entertainment—literally intersects with the beautiful traditions of the past. Our guestrooms celebrate that unique relationship.”

The design seamlessly integrates the particular style and essence of the city into a warm, richly-detailed guestroom. Visitors will immediately notice the deep amber and ice tones throughout the room, referencing Louisville’s deep connection to bourbon and water. Oval nightstands echo the shape of bourbon barrels, while the slender silhouette of a corner floor lamp subtly references the lines of a Louisville Slugger baseball bat. Textiles, fixtures and finishes are rooted in the colors and shapes of the city’s vibrant downtown. At one point in their research, designers lined up 17 different bottles of Kentucky bourbons to precisely match their color and tone.

The design team, waldrop+nichols studio, invested time in visiting Louisville’s landmarks and signature architecture. Among the key inspirations for the hotel’s guestrooms are structures near the Omni property, including the iron building façades along Whiskey Row and the steel trusses of the city’s Ohio River bridges.

“We wanted to ensure that the interior architecture, color palette, forms and textures used in the Omni Louisville portrayed and echoed the city,” said Reggi Nichols, president of waldrop+nichols studio. We found its architecture and iconic elements rich in history and the perfect foundation to build upon for Louisville’s future.”

To incorporate Louisville’s reverence for furnishings that are purposeful while providing character and unexpected details, the design team created hand-engraved custom drawer pulls which reference the city’s founding date of 1778. A monolithic amber acrylic side table echoes the warmth of bourbon, while the carpet is a figurative interpretation of the liquidity of bourbon. Additionally, in the bathroom, an arched mirror references the classic arches throughout Louisville’s historic architecture, such as the iron façades of Whiskey Row.

The signature case piece of the guestroom is a rich, dark wood bar cabinet with copper accents (a nod to traditional copper stills for distilling bourbon), which houses a carefully curated selection of fine Kentucky bourbons and barware.

Guestrooms will average 382 square feet, with 292 rooms with king beds and 286 with two queen beds. Many of the rooms feature 18-inch deep soaking tubs, perfect for a luxurious long bath.

“All of our design nods are authentic to the city,” said McKoy.“Omni works very hard to tell the story of its city, and we want our designs to be true reflections of Louisville and its people. You won’t wake up at Omni Louisville and wonder where you are. You will recognize the city and its distinct characteristics every time you look around our space.”