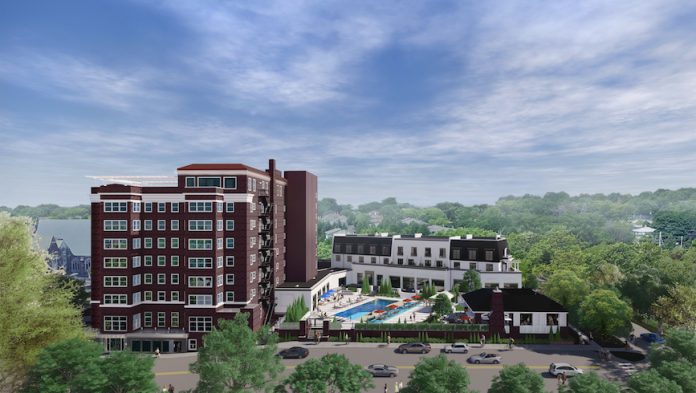 OMAHA, Neb. – Omaha’s former Blackstone Hotel will reopen as the Kimpton Cottonwood Hotel in spring 2020. The hotel name pays homage to the Blackstone Hotel’s original Cottonwood Room bar, which featured a cottonwood tree emerging from the center of the expansive circular bar. The Kimpton-branded hotel will be managed by Pivot Hotels & Resorts.

The Kimpton Cottonwood Hotel will have 205 guestrooms, including 15 suites, as well as a signature steakhouse and lounge, a classically French-inspired cafe, high tea served daily, a resort-style swimming pool, solarium, and over 13,500 square feet of indoor and outdoor meetings and events spaces, including two ballrooms. The eight-story building, a prime example of Second Renaissance Revival architecture, was declared an Omaha Landmark in 1983 and is listed on the National Register of Historic Places in 1985. Significant historical and design elements of the original hotel will be restored as part of the $75 million-dollar renovation.

The opening of the Kimpton Cottonwood Hotel is the latest development in the Blackstone District, where the hotel developers, principals of Clarity Development and GreenSlate Development, have been involved over the last seven years.

“It has been personally a very rewarding exercise to revive the Blackstone Hotel as the Kimpton Cottonwood Hotel,” said developer Thomas McLeay. “We are proud to introduce the property as an anchor in the community as we continue to pave the way in the revitalization of the district.”

Originally opened in 1916, the former Blackstone Hotel had a storied history and was a fixture within the Blackstone District. In its heyday, the hotel became a symbol of elegance and the crown jewel of Omaha. The hotel was not only a destination for the biggest celebrities and dignitaries at the time, such as Bob Hope, Jimmy Stewart, Ronald Reagan, John F. Kenned, and Eleanor Roosevelt, but was also the epicenter of the city’s social scene.

The Reuben sandwich was invented by Reuben Kulakofsky during a weekly poker game held at the hotel and the sandwich was later introduced to the world in 1925 on a hotel menu. The hotel also contributed to culinary history with the debut of butter brickle ice cream in the 1920s.

“For over a century the Blackstone Hotel has been a fundamental part of Omaha’s cultural fabric, hosting countless family celebrations, weddings, and events honoring all of life’s milestones,” said Jay Lund, principal at GreenSlate Development. “This rebirth represents a renewal of the Blackstone’s historic role in Omaha and a continuation of its great legacy.”