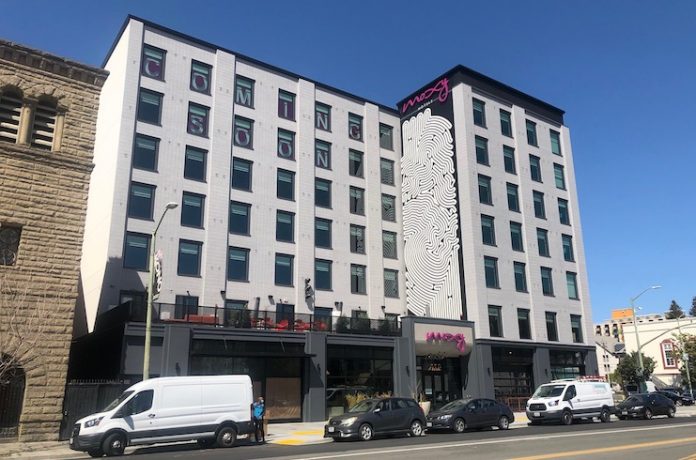 The boutique hotel, which represents one of the first new hotel developments in downtown Oakland in nearly a decade, signifies a response to the increased appeal of Oakland’s energetic urban environment. With a focus on investing in the local community to foster long-term prosperity, Tidewater’s decision to partner with Marriott, Graves Hospitality, and multiple local non-profit organizations underscores the breadth of impact possible for the hotel. Further, the approach utilizing modular construction will help educate local architects, contractors, and investors on the modular build process. Throughout its construction, The Moxy Oakland Downtown brought 100 jobs to the community and is expected to bring new permanent jobs to the downtown Oakland area, furthering Tidewater’s mission to support this dynamic, growing city.

“We’re pleased to open the doors of the Moxy and deliver a new placemaking component to Oakland’s vibrant culture and community,” says Kyle Winkler, director of construction at Tidewater. “We recognized a unique opportunity with Moxy’s modular-friendly design that allowed for efficient and sustainable development within the city. This opening is an important milestone for our company as we look forward to continuing to foster long-term positive economic and social impact in the Bay Area.”

Constructing the first modular Moxy Hotel in the United States enabled Tidewater to reduce construction time by 25 percent, compared to an average construction timeline for a hotel of the same size. The hotel consists of five levels of factory-built wood frame rooms over two levels of a site-built concrete frame. In a continued effort for Moxy Oakland to reflect the values and vibrancy of the local community, Tidewater partnered with Creative Growth, a local non-profit that serves artists with developmental, intellectual, and physical disabilities, to feature an array of eclectic, urban artwork throughout the hotel. The hotel is also partnered with Chapter 510 and the Department of Make Believe, a local writing and publishing workshop for Oakland youth, and will feature the work of young Oakland writers throughout the hotel.

Boasting an expansive street-level amenity space used for programming like weekly events and exhibits featuring local artists, musicians, performers, and neighborhood businesses, the property also includes a number of stylish “Plug and Meet” gathering areas that provide modern ergonomic seating, large writing walls, and 56-inch televisions for presentation projection. Moxy Oakland offers cozy but thoughtful rooms and a bar check-in experience where guests receive their room key and a craft cocktail or non-alcoholic beverage on the house. Additional hotel amenities include healthy continental breakfast and an evening bar featuring wines by the glass and local brews. The hotel will also feature the on-site restaurant, La Palabra, from the chef behind Oakland’s popular Cuban parlor and cafe, Caña. La Palabra is slated to open at Moxy Oakland Downtown in Summer 2021.

Moxy Hotels is Marriott International’s bold brand that debuted in September 2014 with the opening of the Moxy Milan. A boutique-hotel concept for the modern-day traveler, Moxy is a fresh and innovative brand combining dynamic design and adept service at an approachable price point. With tech-enabled rooms, vibrant lobby spaces, and warm, spirited service, Moxy aims to surprise both leisure and business travelers with a thoughtful, memorable, and fun guest experience.