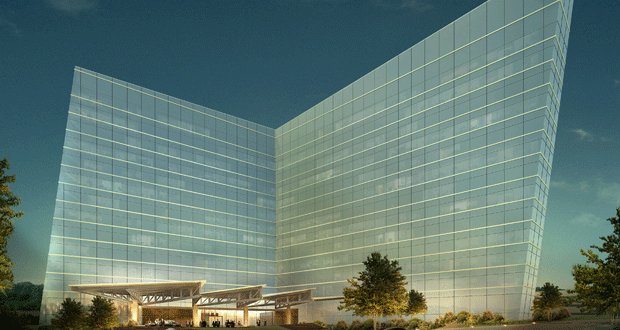 UNCASVILLE, Conn.—Mohegan Sun’s 400-room, 242,000-square-foot $139 million Earth Tower, celebrated its grand opening with a special ribbon cutting event. Mohegan Sun President and General Manager, Ray Pineault and Mohegan Tribal Chairman, Kevin Brown “Red Eagle” kicked the ceremony off by thanking all of the men and women who worked diligently over the last year and a half to design and construct a truly beautiful addition to Mohegan Sun’s property.

A second hotel at Mohegan Sun’s flagship destination was something that both the Mohegan Tribal Council and Mohegan Sun Senior Leadership have long anticipated, since putting original plans on hold back in 2008, due the economic downturn. Chairman Brown spoke to those hard decisions as well as the impact that this long awaited second hotel has already had, stating, “For us, this new hotel does represent the ability to have more room nights and stays, right here at the casino and that has already, just in these early days, proven itself out with the demand that has been placed on this new hotel. But it’s also important to the state, because it represents the 2,000 jobs as this went through the construction phase and represents 200 permanent jobs, as we extend our team members, into this facility, and keep it up and running.”

To help usher in the new hotel and speak to the importance of the strong relationship between Mohegan Sun and the State of Connecticut, additional special guests included Governor, Malloy, Lt. Governor, Nancy Wyman, Senator Richard Blumenthal and Congressman Joe Courtney. U.S. State Senator, Richard Blumenthal, in particular, concluded his remarks by stating, “In Washington, when I talk to colleagues about what is happening to the Native American tribes in their state, they look, with reverence, and some envy, at what you have done here. It is a great American success story, not just in dollars and cents, not just in spectacular building, or in entertainment and enjoyment that you have brought to countless people, but in the triumph of hope, and vision over obstacles, that would have deterred others.”

Overcoming obstacles certainly was fitting, as over the course of the last couple of years, Mohegan Sun has turned away around 1 million hotel rooms in the iconic, 1,200-room Sky Tower. And with much excitement about the new expansion, and finally being able to provide guests with such a well-executed second hotel, Mohegan Sun President & GM, Ray Pineault, thanked all of the contributions and hard work as well as commenting that, “this new hotel gives us a better opportunity to serve the incredible demand we have witnessed in our twelve hundred room, Sky Tower and really allows us to welcome in even more guests in and outside of the state, with many looking to make multi-night visits.” And Mohegan Sun’s President concluded the event with, “what started out in 1996 as a 170,000 square foot Casino with just a smaller sized free music venue, and a few restaurants and shops, is now one of the largest, most impressive, all-encompassing gaming, entertainment, and resort destinations in the world.”