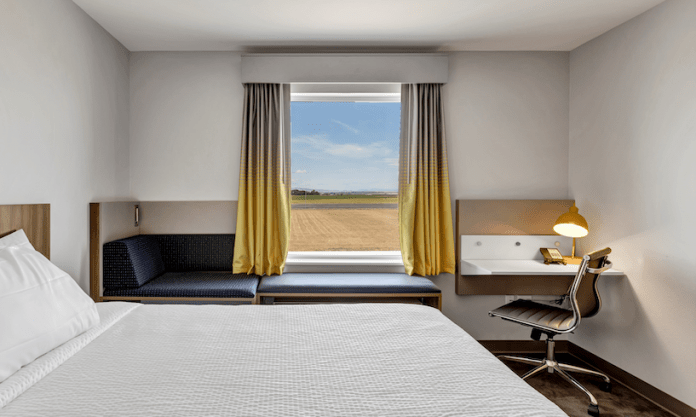 PARSIPPANY, N.J. — Wyndham Hotels & Resorts today announced the opening of the 63-room Microtel by Wyndham in George, Wash.—the first hotel in the world to feature the brand’s efficient Moda prototype.

Microtel by Wyndham first unveiled the Moda prototype in March of 2019. Centered on minimalist design, Moda elevates the Microtel by Wyndham brand while streamlining the development process. The prototype aims to achieve midscale aesthetic and performance at economy costs. Moda was originally designed with the understanding that cleanliness and efficiency are of increasing importance to travelers—now even more so in today’s environment.

“More than ever, development costs and return on investment are what matter most, which is why any developer looking to grow or diversify their portfolio needs to have Moda on their list,” said Keri Putera, Microtel by Wyndham brand leader and vice president of operations. “Inexpensive to build, designed for drive-to business, and easy to clean and maintain, it’s a game-changer in the new-construction space. We believe there’s nothing else like it.”

The Moda prototype was developed in collaboration with Microtel owners and architect firm Hoefer Wysocki. Interiors were designed by TPG Architecture. Moda reduces Microtel’s total footprint by nearly 30 percent versus the prior prototype and delivers more than 70 percent of rentable space—one of the strongest rentable footprints in both the economy and midscale segments. The prototype includes a three-story and a four-story option, helping it meet the needs of many locations.

“As a seasoned commercial real estate developer who wanted to branch out into hospitality, I was incredibly impressed by the team at Wyndham and the Microtel Moda prototype,” said Caleb McNamara, owner of Microtel by Wyndham George. “It’s a thoughtful design, punches above its weight-class when it comes to looks, is cost-effective and easy to build. It’s exactly what we were looking for.”

The Microtel by Wyndham George, the brand’s first hotel in the state of Washington, continues Microtel’s expansion across the United States. Another Microtel by Wyndham with the Moda prototype is slated to open later this year in Hot Springs, Ark. Other markets under development include Destin and Fort Walton Beach, Fla.; Saint Rose and Chalmette, La.; Asheville, N.C.; and Midland, Texas.

The Microtel by Wyndham Moda prototype builds on learnings from the design and construction practices of La Quinta by Wyndham and is part of Wyndham’s new-construction growth strategy, focused on delivering long-term value and quality for owners.