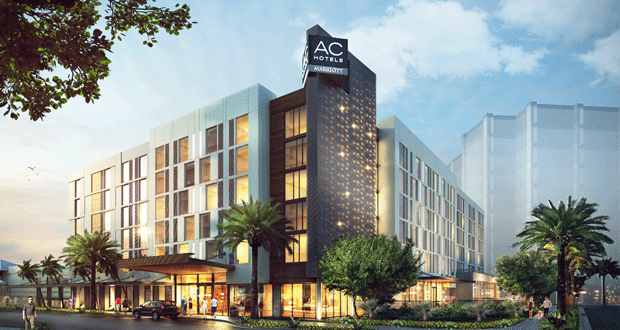 ORLANDO, Fla.—Officials of the PRISA Group, a family-owned developer, builder and owner of green residential communities, hospitality and resort projects in Puerto Rico and Florida, and Peachtree Hotel Group, one of the nation’s fastest growing hotel investment and management platforms, today announced that their newly instituted partnership broke ground on development of three, select-service hotels in Florida: The dual-brand SpringHill Suites by Marriott Orlando/Mall at Millenia and Residence Inn by Marriot Orlando/Mall at Millenia, with 120 and 134 suites, respectively, and AC Hotel by Marriott Tampa/Airport—Westshore with 175 rooms.

The properties currently are under construction with a planned opening date of December 2017. The three hotels will be managed by Marriott Corporation. The construction is being conducted by a partnership between PRISA Group and Orlando-based Welbro Building Corporation. Miami-based Popular Community Bank provided the financing for the projects.

“Our select service hotel platform continues to grow with the addition of three new hotels in key markets in Florida, all next to vibrant food, beverage and entertainment options and with a modern design aesthetic,” said Federico Stubbe, PRISA president and CEO. “We continue to pursue ground-up opportunities in submarkets in the Southeast with strong entertainment offerings.”

The Orlando hotels are located adjacent to the Mall at Millenia, the top 7th highest grossing mall in the U.S, and the AC Hotel in Tampa will be part of the MetWest International complex, located in Westshore, the largest office district on the west coast of Florida.

“We continue to seek out best-in-class partners, and PRISA’s well regarded reputation as a leading provider of green residential and hospitality projects throughout Puerto Rico speaks for itself,” said Jatin Desai, Peachtree’s chief investment officer. “With more than $89 billion in tourism revenue in 2015 alone, Florida remains one of the nation’s top destinations, and we fully expect these properties to quickly become market leaders following their initial ramp-up stages.”

The dual-brand SpringHill Suites/Residence Inn is part of a growing trend to combine hotel brands that appeal to different guest profiles into a single structure. Located in the geographic center of Orlando, the two hotels will reside in a popular hotspot, within close proximity to major attractions including Universal Studios, Orange County Convention Center, I-Drive 360, Orlando Eye, Festival Bay Mall, Wet’n Wild, Sea World, Disney World, Downtown and the new, highest grossing premium outlet mall in the country. The Mall at Millenia is the centerpiece of a 450-acre master-planned development that includes 2.2 million square feet of premier office space and other commercial venues.

The 134-room SpringHill Suites by Marriott Orlando at Millenia boasts spacious suites that combine form and function, providing separate living and sleeping areas. The rooms include contemporary case goods with new, custom design items from West Elm, a dry bar, refrigerator, microwave, spa-like bathroom, walk-in shower and a 43” TV. The 120-room Residence Inn by Marriott Orlando at Millenia is designed for comfort and extended-stays, typically five days or longer. The property’s spacious suites feature a six-foot, walk-in shower, a 43” TV and a kitchen fully equipped with a refrigerator, stove, microwave and coffee maker.

Both hotels share a spacious outdoor setting boasting a resort style pool with bar, game area with giant board games and a lounge with water and fire features. Other amenities include complimentary breakfast, a 24-hour market, a lobby bar and complimentary Wi-Fi throughout the properties. The properties also provide a well-equipped Lifestyle Fitness Center, as well as two meeting rooms totaling 1,600 square feet.