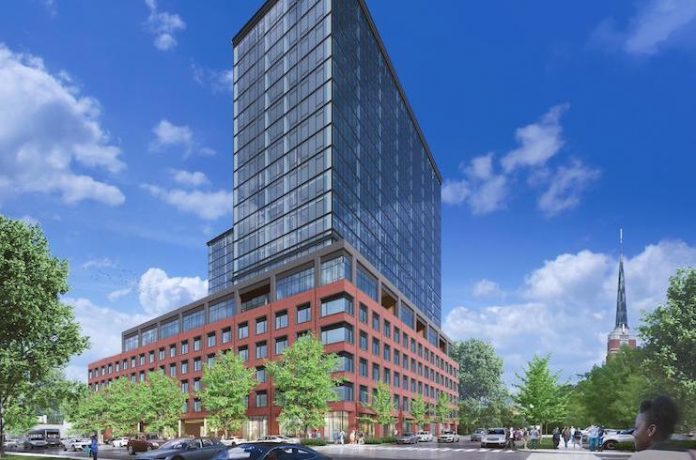 Owned by Tidal Real Estate Partners, the new Kimpton in Raleigh will span the first six floors of the building and feature 179 guestrooms, including 20 suites. Architects at Earl Swensson Associates, Inc., ESa, will build a new mixed-use structure at the intersection of Hillsborough and S. Dawson Streets and feature interiors by INC Architecture and Design. Accompanying the stay experience will be three restaurant and bar concepts, including a rooftop bar and lounge, and more than 6,500 square feet of meetings and events space. The hotel will feature perks such as morning coffee and tea service, evening social hour, “Forgot It? We’ve Got it!” amenity program, a 24-hour fitness center, in-room yoga mats, complimentary bicycle rentals, and a no-fee pet policy.

“We’re thrilled to be opening up a new boutique hotel in downtown Raleigh,” said Mike DeFrino, Kimpton Hotels & Restaurants’ CEO. “We’ve had great success with our Kimptons in North Carolina, and we look forward to offering Raleigh as a new destination in our portfolio. We think our design-led brand and welcoming, innovative restaurants, and bars will really resonate with the city’s locals and visitors alike.”

The Research Triangle, which includes Raleigh and its sister cities Durham and Chapel Hill, is home to academic and healthcare institutions such as University of North Carolina at Chapel Hill, North Carolina State University, and Duke University Health System. In recent years, the city has undergone growth and become known for its cultural and dining scenes as well. Its museums and restaurants paired with its outdoor activities and parks make the City of Oaks a destination for those from near and far. Guests at the new Kimpton in Raleigh will have that within proximity to the North Carolina State Capital, North Carolina Museum of Natural Sciences, and many breweries and food halls.

“Downtown Raleigh has long awaited a luxury hotel experience like Kimpton delivers. The amenities, restaurants, and event spaces will raise the bar for hotel properties in downtown and establish the Kimpton as a sought-after destination for visitors and local residents alike,” said Mick Walsdorf, CEO of Tidal Real Estate Partners. “Our continued investments in downtown Raleigh reflect our confidence and commitment to this market.”

When it opens in late 2025, Kimpton in Raleigh will mark the brand’s fourth property in North Carolina, joining its sister properties Kimpton Cardinal Hotel in Winston-Salem, Kimpton Arras Hotel in Asheville, and Kimpton Tryon Park Hotel in Charlotte.