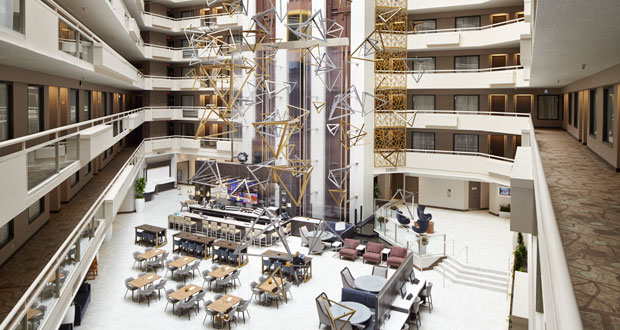 “Having owned and operated the Embassy Suites by Hilton Atlanta-Galleria for the past three years along with several other Embassy Suites hotels, we are intimately familiar with both the marketplace and the brand and how to maximize its value,” said Robert S. Cole, president and CEO of HVMG. “With our home base and four additional hotels in the city, Atlanta is a strategic location for our company. We have the market intelligence and operational economies of scale to maximize hotel profits and deliver investor return.”

As project manager, HVMG oversaw the recently completed $11.65 million renovation of the hotel. The refurbishment included a total reconfiguration of the atrium and lobby, including a new artwork installation, new dining outlet called E’terie, an improved and expanded meeting and gathering space, complete guestroom and bathroom renovations, upgraded amenities, and exterior improvements. Under HVMG’s stewardship, the hotel’s revenue increased from $10 million to $13.4 million, raised net operating income by 107 percent, and improved ADR by 27 percent.

Situated in northwest Atlanta’s Galleria district and within walking distance of the Cobb Galleria Centre, Cobb Energy Performing Arts Centre, and Atlanta Galleria Office Park, the Embassy Suites Atlanta-Galleria is near local businesses such as Home Depot, Coca-Cola, IBM, Lockheed, and Travelport. The hotel provides a complimentary shuttle within a three-mile radius that runs to numerous corporate offices, shopping malls, restaurants, theaters, and SunTrust Park—home to the Atlanta Braves.