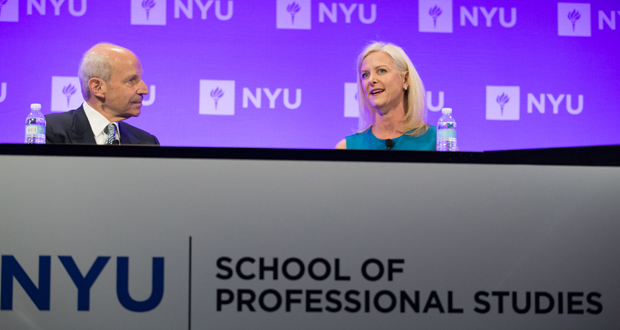 At this year’s NYU International Hospitality Investment Conference in NYC, more than 2,000 hospitality professionals from all over the globe gathered to discuss the future of the travel industry. Throughout the conference, attendees and speakers covered everything from the role of travel in the U.S. economy to what we can expect from a development standpoint in the coming years. Here is just a taste of the discussions that occurred during the show.

“I have spent the last year traveling across many of NYU’s global sites to have conversations about professional development and programs where we can have impact on local economies, and the field that is most widely noted is hospitality and tourism.”

“Our industry now supports some 15 million jobs. That’s about 1 in 9 Americans who make their living in some aspect of the U.S. travel industry. These are good jobs. These are middle class jobs that put people on a pathway so they can embrace the American Dream. And, unlike jobs in other industries, our jobs—travel jobs—cannot be exported.”

“I think that as we begin to work with this administration to make sure they understand the very clear domestic benefit of international travel, its importance to job growth, and its very real importance to our economy, I remain optimistic [of their response].”

“If you are a full-service, upper-upscale, or luxury hotel group as TRE is, you have to protect yourself from saying, ‘Well, if we could only get craft cocktails into that Courtyard.’ You have to protect yourself from wanting to become something that you aren’t. On the other hand, when you’re in a market—[such as New York], now the single biggest tourist attraction—what we’re trying to figure out is how do we remain select service but have some of the bells and whistles that the clientele wants.”

The Evolving Nature of the Lifestyle Segment

“I think that the [lifestyle segment] is definitely going to grow and constantly evolve. What’s cool and hip today is not going to be a cool and hip thing in three years. So how do you change it to keep it relevant and current? I think that’s going to be a big challenge for owners from a capital or reinvestment perspective, and on the food and beverage front. Tastes change, trends come and go, and there’s always going to be new competition coming in. I think that will separate, so to speak, some of the winners and the losers in the long run—who can find that balance between maintaining and sustaining an operation, and keeping it in a market leadership position, versus just being that flash in the pan.”

“Your customer today is actually simply to understand, difficult to respond to… It’s tough enough to acquire a good customer, it costs a fortune to acquire customers. But the challenge is to retain that customer. When you understand what he wants, you can respond to it, and then he’ll be more loyal to you.”

“I think that we have seen a very strong interest and huge influx of Asian investment coming into the U.S. I think the trend will continue in the near future—in the next two to three years—largely driven by the abundance of capital in China. The majority of them are still looking for full-service, high-end, branded hotels in first-tier cities. The trend is now that the yield in first-tier cities is not as good as they would like to see, they’re willing to go to smaller cities—for example, Denver, Houston, Dallas, and some key cities in Florida. But they’re still not quite going into places like Kansas or Memphis. It’s a process.”

These Three Hotel Companies Each Exceed 500,000 Rooms in North America

CEOs Sound Off on Megatrends at NYU Conference