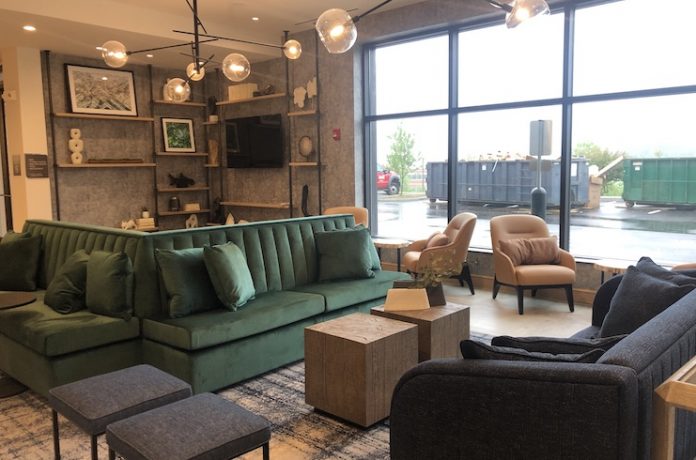 Hilton Garden Inn Boston Canton is near regional and national Massachusetts-based companies and the growing community of Canton, located 18 miles south of Boston. Corporate headquarters of Boston Mutual Life Insurance, Dunkin’ Brands, and Harvard Pilgrim Tufts are all within walking distance of the hotel. The hotel is a short drive from the new Copperworks Canton Condominium community and growing Trillium Brewing Company.

The hotel’s proximity to Dunkin’ Brands headquarters sparked a partnership as Dunkin’ coffee will be served exclusively at the hotel, a first for the Massachusetts-based coffee company.

“We look forward to the many opportunities this location will provide to guests of the Greater Boston area and beyond,” said David Roedel, business development officer, Roedel Companies. “We are excited to introduce our brand to the community, to create a long-term, collaborative relationship with Dunkin’ Brands, and to be a gathering place for corporations, youth sports teams, and area residents through our dining options.”

Near Blue Hills Reservation and the Blue Hills Ski Area, guests can enjoy a hike or hit the slopes locally. Proximity to the Blue Hills Country Club, Wollaston Golf Club, and other wedding venues offers a location for wedding parties.

Hilton Garden Inn Boston Canton has a 60-foot bar and open-concept restaurant. The restaurant serves breakfast and dinner. As the hotel forms a relationship with the local brewers association, dining options will evolve over time to include local craft brews.

Along with an open-concept lobby and restaurant, the hotel’s design pays homage to the history of Canton. Throughout the hallways and dining rooms, artwork highlights the landmarks of Canton, including Town Hall, downtown Canton, and the Canton Viaduct, which, according to the American Society of Civil Engineers, is believed to be the second-oldest multiple-arch masonry viaduct in the United States.

The hotel also features an indoor pool and 24-hour fitness center with cardio machines and dumbbells. Large windows separate the two spaces, allowing for easy supervision if groups are split among the two spaces.

The hotel hass 135 guestrooms, five private dining/meeting rooms, and an event space with a large projector screen. All private dining rooms open to the courtyard where guests can have cocktails around the fire pit with live music. There is one one-bedroom suite on each floor of the four-floor hotel, perfect for bridal parties or other special occasions. Amenities in each room include a flat-screen TV, single-cup coffee maker, microwave, mini-fridge, and three-prong outlets and USB ports to charge electronics.

Hilton Garden Inn Boston Canton and Roedel Companies are hosting an opening event in late summer or early fall to formally celebrate with the community.