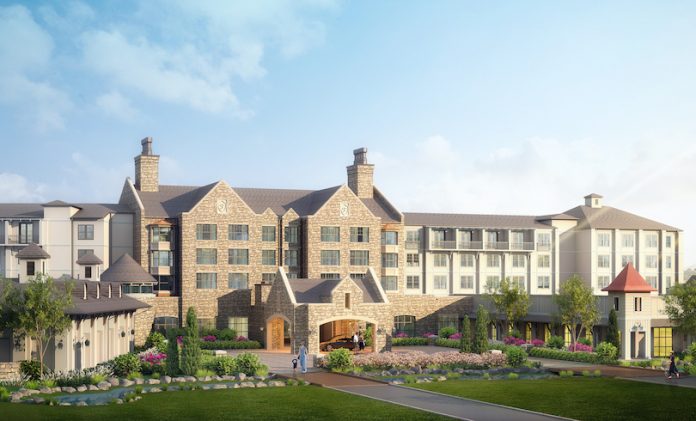 FOXHALL RESORT, GEORGIA — Foxhall Resort, a sporting and outdoor destination in Georgia, will build a five-story, 250-room Westin hotel with a 50,000-square-foot conference center. Construction is slated to begin in the third quarter of 2022, with an opening scheduled for 2024. Foxhall’s plans were unanimously approved by the Douglas County Board of Commissioners.

Foxhall Resort is owned by the Merrill Trust, which is one of the largest privately-owned mixed-use master-planned developers in the United States.

“Foxhall Resort has become a global go-to destination for corporate retreats, weddings, outdoor enthusiasts, and families seeking fun and adventure just 20 minutes from the Atlanta airport,” said Harrison Merrill Jr., president and CEO, Foxhall Resort. “We’re excited to introduce more people to this beautiful land and the outdoor experiences here, and in so doing, to create an economic juggernaut for Douglas County.”

The Westin Resort and Conference Center is anticipated to generate more than 400 jobs and millions of dollars in sales tax revenue and ad valorem taxes for Douglas County and the Douglas County School System over the next 15 years. Together the new Westin and the existing Foxhall Resort are anticipated to attract more than 100,000 people to Douglas County along with an estimated 1,000 corporate events, weddings, and social gatherings each year.

“We envision one of the largest economic development corridors in the United States along the South Fulton Parkway between Hartsfield-Jackson Atlanta International Airport and Foxhall Resort. We’re excited to be at the forefront of that vision,” said Harrison Merrill Sr., founder, Foxhall Resort.

The new hotel announcement comes after a banner year for Foxhall Resort. In June 2021, the resort opened a fully-appointed clubhouse that includes the Pheasant Blue restaurant and bar, the Flying Fox grab-and-go market and retail shop, additional corporate meeting space, and an infinity pool overlooking Lunker Lake. The county also approved additional residences and estate homesites that will be for sale. The sales team is led by Pauline Miller of Compass Development Marketing Group.

“Foxhall Resort is the Merrill family’s vision of a resort paradise in metropolitan Atlanta where families and groups can enjoy fantastic outdoor experiences, sporting activities, and beauty to create many memories and photographic moments together which will last a lifetime,” added Merrill Sr.