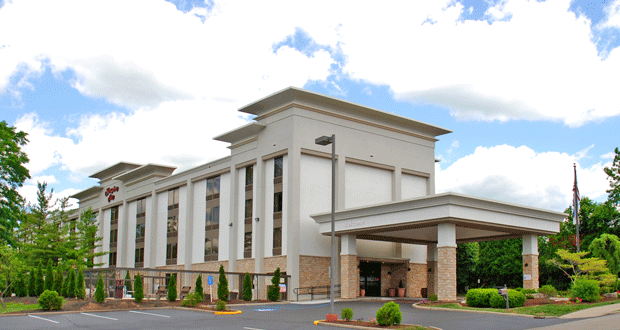 Interior renovations were made to all of the public spaces and the 129 guest rooms, which now feature all new furniture and beds, linens, and more closet space. Renovations were also made to the hotel’s exterior to modernize it. The construction of new guest room bathrooms are in progress and will be complete in spring 2017. The grand re-opening included a ribbon-cutting, champagne toast, hors d’oeuvres, and raffle prizes including Indiana University football tickets, a 43” television, one-night stays, and more.

“As keeping up with the needs and preferences of our guests remains a top priority for FHG, we are happy to unveil the new changes made to the Hampton Inn Bloomington,” said Habeeb. “The entertainment options in Bloomington are endless and we wanted to bring a new modern feel into the spaces throughout the hotel to compliment what you’ll find in Bloomington.”

Located at 2100 N. Walnut St., the Hampton Inn Bloomington is next to Memorial Stadium and Indiana University. Just one mile from downtown Bloomington, guests can enjoy convenient access to a number of local attractions, including Oliver Winery—Indiana’s oldest wine maker, Upland Brewery—Indiana’s largest microbrewery, Lake Monroe—the state’s largest lake, Bloomington Assembly Hall—home to the Indiana Hoosiers, and Kirkwood Avenue, which consists of a number of shops and restaurants leading to the Sample Gates at the entrance of Indiana University. Also within close proximity is the Bloomington Entertainment and Arts District—60 blocks of galleries, live music venues, restaurants, and shops. The hotel includes a modern fitness center, outdoor pool, complimentary daily hot breakfast buffet, and business center.