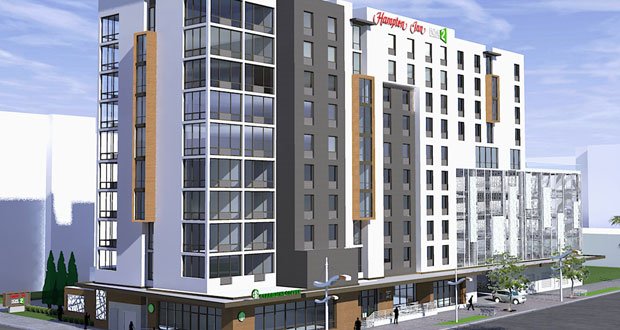 Tampa, Fla.–Liberty Group will soon break ground on a new dual-branded, mixed-use project in downtown Tampa—a Hampton Inn by Hilton, Home2 Suites by Hilton, and Starbucks Coffee. The development will break ground in January 2018 and open in mid-2019.

Tampa-based Liberty Group is the developer of the project, and the project team consists of local consultants including Wichman Construction as the general contractor, Chancey Design Group as the architect and interior designer, and Hamilton engineering as the civil engineer. Liberty Group, which has owned and managed 55 hotels throughout the United States, also developed the
Aloft hotel in downtown Tampa in 2014, which remains as the newest hotel to be developed in the
downtown core.

The mixed-use project will be Hilton’s first purpose-built dual-branded hotel in West Florida. The hotel will have 213 guestrooms and extended-stay suites, and large communal spaces and amenities
such as mobile check-in, a social media wall, and super-charging stations. Additional features include a Precor-equipped fitness facility, outdoor rooftop pool, flexible meeting space, and a 24-hour business center. Additionally, the hotel will have a 200-space integrated parking garage.

New to Tampa Bay is the Home2 Suites by Hilton brand, which is designed for today’s business and
leisure traveler who desires a contemporary, comfortable stay. The property will emphasize spacious
suites with a customizable working area, fully-equipped kitchen, microfiber hypoallergenic bedsheets, and a fresh, vibrant aesthetic. The property’s pool is accompanied by a grilling patio for social gatherings and home-style barbecues.

“Our development of this new mixed-use project in the Channel District of downtown Tampa is a product of the tremendous growth the area has witnessed over the past few years,” says Punit Shah, CEO of Liberty Group. “Tampa continues to establish itself as a world-class city, and our
urban core offers diverse demand generators that create the ideal location for both the Hampton by Hilton and Home2 Suites by Hilton hotels. The addition of the Starbucks Coffee will create a neighborhood gathering spot for the local community and help our project integrate with the residents of Channel District.”

Located in the heart of the Channel District, the project will be within walking distance of the new USF Health building, Water Street, Amalie Arena, Publix, Tampa History Museum, and Port Tampa Bay. The $40 million project is was financed by Centennial Bank, which provided a $24 million construction loan, and the Shah Family Office led by Punit Shah. Jameis Winston, former Florida State University Quarterback and Heisman Trophy award recipient, and current Quarterback of the Tampa Bay Buccaneers, is a limited investor along with the Shah Family Office. Shah is also a minority owner of the Miami Marlins Major League Baseball, as part of an investment group led by Derek Jeter. Liberty Group has ownership interests in the Pointe on Harbour Island, is developing the Starbucks Coffee on Harbour Island.