Home Finance & Development Detroit Foundation Hotel to Open in May 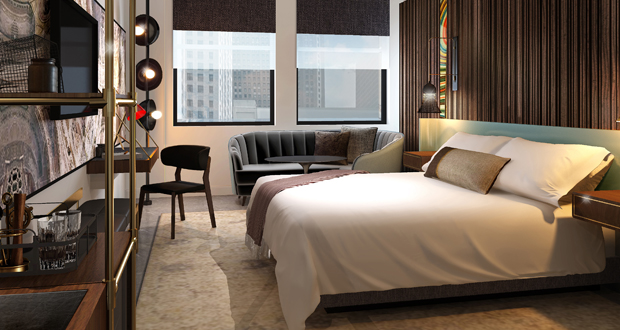 Located in the former Detroit Fire Department Headquarters at the gates of downtown Detroit, the 100-key Detroit Foundation Hotel is set to open May 2017. The property will also be home to The Apparatus Room, a new American restaurant offering a hyper-regional experience demonstrated through the culinary style of Michigan-native and two Michelin-starred chef Thomas Lents.

The hotel will rise five stories and is situated on the corner of West Larned Street and Washington Boulevard, positioned across from the Cobo Center and just three blocks away from Campus Marius Park. In addition to the re-imagination of the Detroit Fire Department building, the hotel will also encompass the former Pontchartrain Wine Cellars building directly adjacent and house a new rooftop ballroom, boasting expansive views of downtown Detroit.

“Our team is thrilled to join the Detroit market,” said Mario Tricoci, Co-Founder and Chief Executive Officer of Aparium Hotel Group. “In creating this hotel, we are collaborating with local makers, artists and innovators to introduce a true Detroit experience for both locals and visitors. It’s an incredible time in Detroit and we’re excited and honored that Foundation Hotel will have the opportunity to play a role in the city’s story.”

The hotel is being designed in partnership with award-winning Simeone Deary Design Group creating a space that demonstrates an appreciation for Detroit’s past while celebrating the city’s exciting future. The design team will bring to life a design ethos that tells the shared vision of the new Detroit by juxtaposing existing firehouse features such as the iconic red arched doors and the historic glazed brick tiles and setting them against modern locally made fixtures. Similarly, guestrooms include nods to old Detroit including reclaimed and repurposed moldings and automotive-inspired furniture pieces.

Aside from the exciting contrast of old and new, the team has reached out to the community and tapped local artisans, such as Detroit Wallpaper Company and Architectural Salvage Warehouse Detroit, to contribute to the hotel’s communal and industrial luxury design. In addition, the team worked alongside talented Matt Eaton, Director/Curator of Red Bull House of Art, to identify both up-and-coming local artists and well-known artists to source unique elements for the hotel to encapsulate the stirring art scene of downtown Detroit.

Spanning the entire ground floor of the hotel, The Apparatus Room, aptly named after its original purpose in the fire department headquarters to house fire engines, will be an inviting space punctuated by a central communal bar and anchored by an open kitchen. The menu will deliver iconic American fare with Executive Chef Thomas Lents at the helm. During the daytime, the bar will function as a coffee bar with counter seating featuring local partner, Anthology, and pastries from the restaurant. The Apparatus Room will also offer the Chef’s Table at Detroit Foundation Hotel, which in addition to serving a multi-source tasting menu from Chef Lents, will serve as an incubator for global talent visiting the Detroit market and local culinary friends.