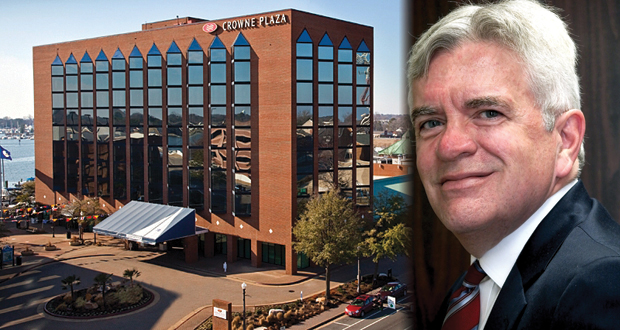 David Mumford is now senior principal of Mumford Company, the real estate brokerage firm his father George founded in Newport News, Va., in 1978. When he joined the company in 1981, he says, it was still something of a “mom-and-pop” shop. “It was my father, mother, me, and just one other employee, and we worked with properties within a 300-mile radius of Newport News,” he describes. Although, Mumford says, the company has handled more than 1,000 real estate transactions and now has added regional sales offices in Atlanta, Dallas, Chicago, and Washington, D.C., it retains many of the qualities that brought it to this point and should sustain it far into the future.

“I’d say we’ve been able to survive and prosper, in part, because we stick with our knitting; through strong markets, weak markets, and everything in-between, we always have always been a company focused on the sale of midmarket and economy hotels.” He says, too, that his father always impressed upon him, “Remember, that’s our name on the door—so do things with integrity and treat people how they want to be treated.”

Mumford observes how, with the ever-increasing range of hospitality properties now available, brokerage firms such as his can lose focus, but says that although it has expanded dramatically, Mumford Company never lost sight of its mission. “We didn’t get into ancillary businesses, sell luxury resorts in the Caribbean, or five-star hotels in Manhattan; we have a niche and a good reputation within that niche.”

As he describes, over the years, the company made its transformation from a regional family business to a multi-office, multi-owner national business, one step at a time. “We first began to spread our wings when we began working with Manor Care—now Choice Hotels—which brought us into new markets beyond the limited radius we had worked with previously.”

This expansion of their reach, he says, mushroomed and fed naturally into adding partners and team members to take ownership of their regions. They now include: managing principal Ed James, an active broker based in the firm’s Virginia headquarters who also supervises all sales activity for the firm; managing principal Steve Kirby, an active broker and who manages the marketing and administration operations of all five of the company’s offices; and principals Burton Brooks, based in the firm’s Atlanta office, and Justin Pinkard, based in the Washington, D.C., office. Providing additional coverage across the country are George Arvanitis, who is managing director for the Midwest in the firm’s Chicago office; senior associate Andrew Smith in the Washington, D.C., office; and Ryan Patterson, a senior associate in the Dallas office.

Mumford says this expansion of ownership has given him the freedom to focus on other areas. “These gentlemen—there are not yet any women principals—have taken on more of a role operationally, which has allowed me to get back to my roots and do more of what I enjoy most, which is listing and selling hotels.”

It has also enabled him to focus on the next generation of hoteliers, both in the office and as a member of the advisory board of the hospitality and tourism program at Virginia Tech. “It’s been interesting to help open the eyes of students to the industry, to let them know there’s more to the field than just operations.” He especially enjoys working collaboratively with the new hires, four of whom were recently plucked from the Virginia Tech program. “I help them jump in, get wet and swim, working with them to help them get transactions completed.”

Looking back, Mumford reflects on his career in hospitality. “It’s very satisfying to see people you worked with early in their career grow and succeed.” He recalls a college professor and provost at a local college who were also small business owners. “They bought their first hotel with us and now have 20-30 hotels, with their children working in the business.”

Mumford says he expects his company’s growth to continue by holding true to their values of integrity and best practices while also expanding ownership and being open to new ideas and “new blood.” “In the past five to ten years, we have brought in a lot of new blood in terms of sales people. We start them on the ground floor as analysts, and allow them to learn how we work with our clients, advising them on the best ways to manage their portfolios. Some have been with us for as long as ten years and are evolving into really good hospitality investment professionals.”

“We have to let new ideas in, let things be done the way they need to be done in today’s world in terms of processes and procedures,” he maintains. This, he says, requires recruiting and retaining the best employees. “We’re only as good as the people we have. What I see in this generation is that they want more than just money, they want to have a say in how things are done. That is why we need to allow these younger folks to have an opportunity to earn in, own in, and have a say.”