CHICAGO – Sable at Navy Pier, which marks the 100th property milestone for Curio Collection by Hilton, officially opened its doors to the public on Thursday, March 18. Sable at Navy Pier is the first hotel to break ground on one of Chicago’s most iconic and historic landmarks. Developed and operated by Maverick Hotels and Restaurants and led by ACRON USA, this project joins numerous restaurants, shops, and boutiques at Navy Pier as well as Offshore, the “World’s Largest Rooftop Bar” as recognized by the Guinness Book of World Records.

Sable at Navy Pier has 223 guestrooms and suites with a nautical theme that incorporates the naval history of the city’s pier, with weathered brass, shipbuilding materials, and the use of smooth curves to illustrate that of a ship’s interior cabin, along with a color palette of mixed neutrals, which are highlighted by a spectrum of blues and blue-greens to pay homage to the lake. Each room has floor-to-ceiling windows with lake and skyline views, along with corner room upgrades, serenity beds, and spacious living room areas. The angled surfaces of each room’s window seat create a textured exterior that allows the ever-changing range of light, shadow, and color of the lake to reflect within the space.

“I could not be more thrilled to be at the helm of such a unique and monumental hotel. The Sable will truly serve as an international destination in Chicago, considered one of the top cities in the world,” said Laurent Boisdron, general manager, Sable at Navy Pier Chicago. ”We look forward to sharing the extraordinary views, design, and excellent service that Curio Collection is known for and always achieves.” 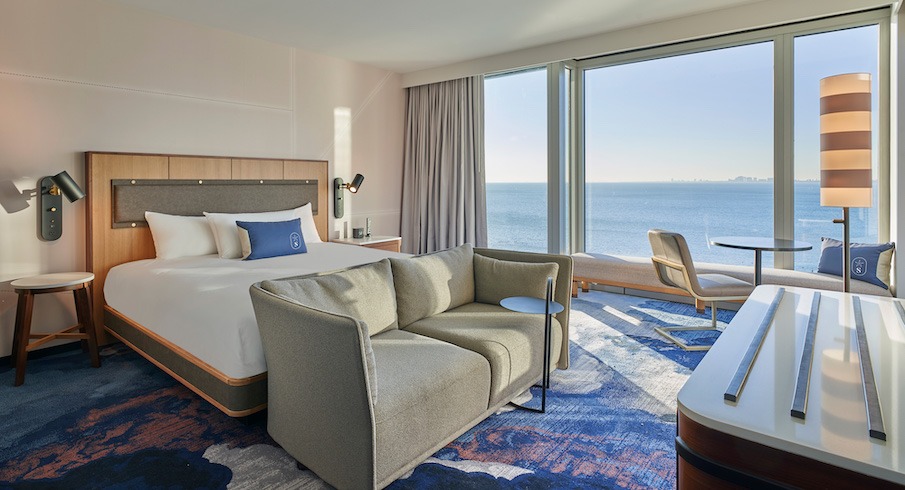 “We have long envisioned a hotel transforming this iconic cultural destination into a place where overnight guests can experience the most spectacular views of our lakefront and city. We are so thrilled that it has come to fruition,” said Marilynn Gardner, president and CEO, Navy Pier. “The opening of this one-of-a-kind destination hotel and accompanying restaurant comes at a time when our city is ready to recover from the COVID-19 pandemic and guests from the region look to resume travel. Sable at Navy Pier will serve as the perfect respite and complementary addition to the many other treasured experiences at the Pier year-round.”

With more than 4,300 square feet of meeting and event space, Sable at Navy Pier is poised to host weddings, parties, and functions. The hotel was designed with three separate towers so guests looking to host an event have the option to rent an entire wing of the hotel to for extra space and privacy.

“As we celebrate the 100th Curio Collection opening, we are delighted to welcome guests to Sable Navy Pier, a truly extraordinary property that sits on one of Chicago’s most iconic landmarks,” said Jenna Hackett, global brand head, Curio Collection by Hilton. “Embracing the storied heritage and culture of its locale, this new property is another example of how Curio Collection serves travelers seeking one-of-a-kind, curated experiences and continues to expand our portfolio in the world’s most sought-after destinations.”

The name Sable is an homage to the historical vessel. During World War II, Navy Pier served as a training center for new recruits in the United States Navy and the homeport for USS Sable. Today, Lake Michigan surrounding Navy Pier is said to host over 143 aircraft assemblages that still remain within its depth, representing the largest and most preserved groups of U.S. Navy sunken historic aircraft in the world.

“ACRON considers The Sable Hotel at Navy Pier to be one of our ‘trophy projects’ over our 40-year history,” said Peer Bender, CEO of ACRON. “We are thrilled to present this spectacular hotel to the City of Chicago and all of its visitors.”