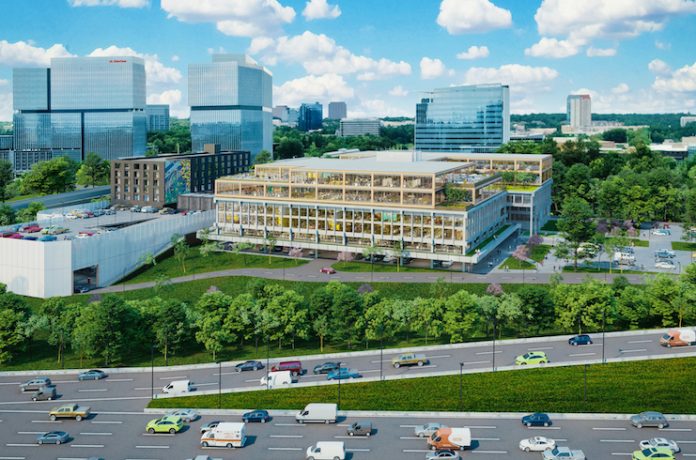 ATLANTA—The Georgetown Company and its affiliate RocaPoint Partners, announce the latest updates for Campus 244, an over one million square foot mixed-use development adjacent to the Dunwoody MARTA station in Atlanta’s Central Perimeter submarket. On 12.8 acres, the campus will feature a 145-key Element Hotel with a lobby bar and separate local restaurant complementing the 400,000 square foot adaptive reuse office building and 25,000 square feet of new food and beverage establishments. This announcement comes as pre-leasing momentum builds around office and retail space at the mixed-use campus.

“With all of the pre-development pieces now in place, we are ready to forge ahead with the next phase in the redevelopment of Campus 244 and deliver a walkable, amenity-rich creative campus in Atlanta’s largest office submarket,” said Jonathan Schmerin, managing principal of Georgetown. “Campus 244 caters to the wants and needs of today’s workforce, with open and modern office spaces, an exciting restaurant/bar mix, and on-site amenities such as a new Element Hotel. It is emerging as a true mixed-use destination for the Central Perimeter market.”

The first phase includes the adaptive renovation of the existing Gold Kist office building into a five-story, 400,000 square foot building with a timber overbuild. The modernized workspace features generous 15-foot ceilings, outdoor terraces, balcony space, and 90,000 square foot floor plates that emphasize daylight throughout. The building is also focused on health and wellness, offering several workspace features such as HVAC systems, touchless elevators, restroom technologies, open staircases, and operable windows. S9 Architecture, the architectural firm, is engaged to handle the design and planning for Campus 244. Main
Street Advisors is also partnering with Georgetown and RocaPoint on this project.

In addition to the adaptive reuse office building, the first phase will include a 145-key Element Hotel, part of Marriott Bonvoy’s portfolio of 30 leading brands. The hotel will feature a lobby bar and areas to gather for meetings, remote work, and collaboration, as well as spots to get coffee with friends and colleagues.

“We are excited to introduce the Element Hotel brand to the Perimeter market, as well as the opportunity to be in partnership with RocaPoint Partners and The Georgetown Company in this impressive redevelopment,” says Mitch Patel, president and CEO of Vision Hospitality Group. “As we currently own and operate nine hotels in the Greater Atlanta market, including the recently opened AC Hotel by Marriott Atlanta Perimeter, our connection to the community and commitment to its success are significant. We are excited to begin this exclusive project as part of the area’s transformation.”

The project will include 25,000 square feet of restaurant space, including concepts from the more than 20 food and beverage establishments within RocaPoint and Georgetown’s $500-million mixed-use development in Alpharetta, Halcyon. The restaurant concepts at Campus 244 will be located surrounding a green space, providing a connected gathering space for employees and the local community. Steve Yenser with Yenser Co., who also led efforts to curate the mix of national and local restaurants at Halcyon, is managing retail leasing.

“In recent years, heavy investment in the Central Perimeter market has stimulated job growth and attracted a hub of major Fortune 500 and Fortune 1000 companies from across the Southeast,” said Phil Mays, principal at RocaPoint Partners. “At Campus 244, we’re bringing a proven model of a dynamic restaurant mix surrounding a central green space that provides an activated sense of place for employees and visitors alike. As the momentum in the submarket has continued to grow, we are capitalizing on the opportunity to deliver a unique and totally reimagined transit-oriented campus.”

RocaPoint and Georgetown purchased the former Gold Kist headquarters in 2020. The firms are also underway with the second phase of Halcyon, which introduces an additional 60,000 square feet of office space and has announced leases for Morgan Stanley, BBQGuys, and Alimera at the project. RocaPoint and Georgetown are also in progress on a billion redevelopment of the County Square project in Greenville, South Carolina, and RocaPoint recently completed the PGA TOUR Global Home in Ponte Vedra Beach, Florida.