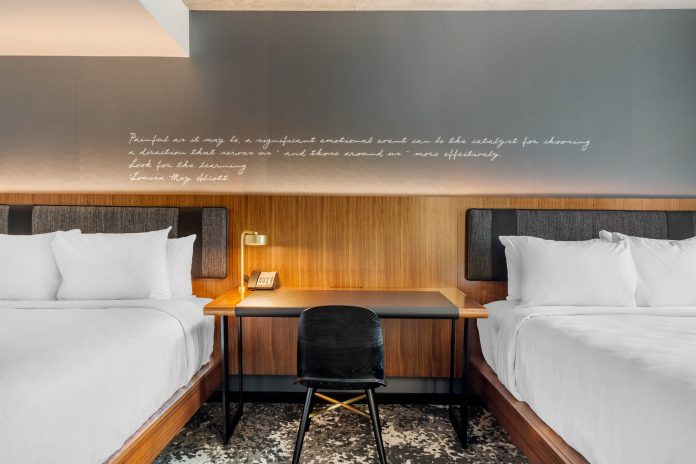 Rockville, Md. – Cambria Hotels announced the opening of Cambria Hotel Boston, Downtown-South Boston. The Massachusetts hotel is the eighth Cambria location to open its doors this year and up to five more Cambria hotels are expected to open in across the country by year-end.

The Cambria Hotel Boston, Downtown-South Boston is located within walking distance of the Boston Convention and Exhibition Center and the city’s Seaport District, near major corporations including General Electric, Gillette, and Amazon’s regional technology office. The hotel sits directly across from the Massachusetts Bay Transportation Authority Red Line T station, providing easy access to all points in the city, Cambridge, as well as Boston Logan International Airport.

“We couldn’t think of a more fitting place to welcome the Bay State’s first Cambria hotel and continue a busy period for the brand than South Boston — one of the city’s fastest growing neighborhoods,” said Janis Cannon, senior vice president, upscale brands, Choice Hotels. “The hotel conveys a unique sense of place through dramatic design and architecture, which perfectly bridges the area’s industrial past with the city’s academic spirit.”

The hotel was developed by City Point Capital, an experienced real estate investor that has developed and designed numerous commercial and residential properties throughout the Greater Boston area, and will be managed by Meyer Jabara Hotels, an award-winning hospitality and management company.

“Boston is our hometown, so it was important that the hotel reflect the heart and soul of the neighborhood,” said Ryan Sillery, principal and owner, City Point Capital. “We’re proud that the Cambria Hotel Boston, Downtown-South Boston manages to convey a genuine ‘Southie’ experience while embracing the area’s innovative future — and thrilled to work with Choice to bring this hotel to life.”

There are currently more than 45 Cambria hotels open across the U.S. in popular cities, like Chicago; Dallas; Los Angeles; Nashville, Tennessee; New York; New Orleans; Phoenix; and Washington, D.C. The brand is on pace to break its openings record for the second-straight year and is fast approaching 50 open Cambria hotels, including a soon-to-open property in Anaheim, California.