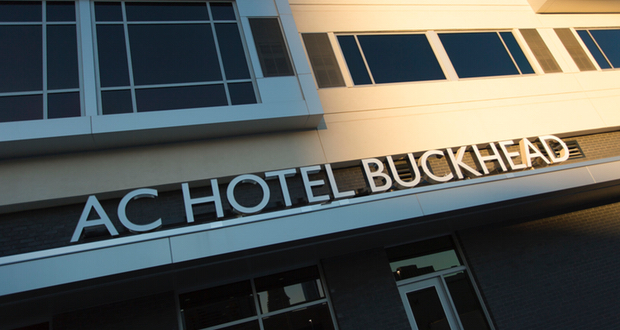 ATLANTA—The AC Hotel Atlanta Buckhead at Phipps Plaza, Atlanta’s first AC Hotel and the first new Buckhead hotel in eight years, opened on the corner of Peachtree Street and Wieuca Road. The six-story hotel was designed by Atlanta-based design firm, Cooper Carry, and includes 166 guest rooms and suites. The firm designed the hotel with a timeless and classic sophistication in juxtaposition to, and complementing, its trend-driven neighbors, Lenox Square Mall and Phipps Plaza.

“There has been tremendous growth and transformation in Buckhead over recent years,” said Bob Neal, a principal in Cooper Carry’s Hospitality Studio. “The hotel design reflects its upscale surroundings and lifestyles of those frequenting the thriving corner of Peachtree Road and Wieuca Road. We think of it as the little black dress or navy suit adjacent to the high-end world of fashion.”

The AC Hotel Atlanta Buckhead at Phipps Plaza features sustainable technology solutions, including View Dynamic Glass, which reduces energy consumption, especially during peak times, by approximately 20 percent. View Dynamic Glass relies on a 360-degree photo sensor on the roof to measure the sun’s intensity. The glass is made of “smart layers” of glazing composed of metal oxide. The sensor sends a low voltage electrical current to the glass, which excites the metal oxide ions and causes the levels of tinting to change for greatest efficiency.

In addition, the window tinting in the AC Kitchen, AC Lounge, meeting rooms, boardroom and the suites can be controlled manually using an app on an iPod. Guests will also be able to check in through their mobile device and receive their room keys via phone.

Cooper Carry’s design responds to AC Hotel’s unique brand, featuring modern colors with European style and a Spanish flare. The hotel offers a few unique, deconstructed king rooms, which seamlessly integrate the bedroom and bathroom in one space. In these rooms, the toilet and shower have private entrances, but the sink is open to the rest of the room with a mirror providing some distinction.

“These rooms resonate with today’s traveler,” said Neal. “Often times, guests would rather work from bed than from a desk, and they rarely use closet space. They also want easy access to get ready at the sink and mirror, so we catered to their mindset and infused a European designers’ eye for style throughout the project.”

The hotel is equipped with a robust list of amenities including an AC Library, AC Lounge, AC Kitchen, a 24-hour fitness center and an indoor heated whirlpool. The AC Hotel Atlanta Buckhead at Phipps Plaza is a joint venture by Noble Investment Group (“Noble”) and Simon.

Over the last year, the corner of Peachtree Street and Wieuca Road has undergone various modernization and new construction projects. Simon Property Group recently renovated the interior and exterior facades of Phipps Plaza. Cooper Carry led the interior repositioning. The Johnson Studio at Cooper Carry is also working on the new Ecco restaurant by Fifth Group Restaurants, which will go next to the new AC Hotel Atlanta Buckhead at Phipps Plaza and open mid 2017.