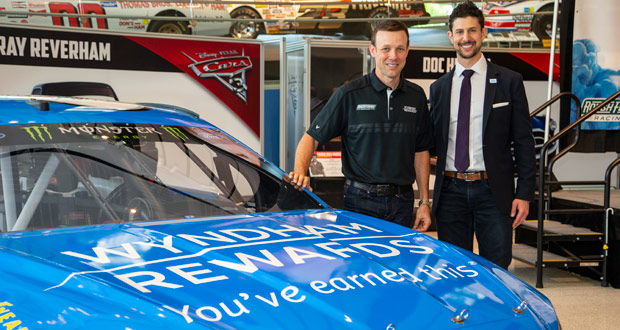 CONCORD, N.C.—NASCAR champion Matt Kenseth will return to the organization where he began his NASCAR career, piloting Roush Fenway’s flagship No. 6 Ford Fusion for a part of the 2018 season. The team also announced a new multi-year partnership with Wyndham Hotel Group’s loyalty program, Wyndham Rewards, as a new primary on the No. 6.

“With iconic brands like Wyndham, Days Inn, Super 8, Ramada, and more, Wyndham Rewards was built for the everyday traveler and that’s who race fans are—they are the folks hitting the road, heading from track to track, supporting their drivers, and showing their love of the sport,” Eliot Hamlisch, vice president of worldwide loyalty and partnerships at Wyndham Hotel Group, explains. “Roush Fenway is one of the most recognized names in racing and the opportunity to work with them in support of Matt’s homecoming is something we see as really special.”

“Having a globally recognized name like Wyndham come on board is big for all of us—not just Roush Fenway, but for the sport as a whole,” Kenseth says. “It says a lot that they chose this team to carry their colors, and I’m going to do my best to make sure we perform for them, both on and off the track.”

Kenseth piloted Jack Roush’s No. 17 Ford for 13 seasons and brought home the team’s first Cup championship in 2003 as well as its historic 300th victory with a 2012 Daytona 500 win. One of the most accomplished drivers of NASCAR’s modern era, Kenseth boasts 39 NASCAR Cup victories. He is one of only six drivers in the sport’s 75-year history to win a Cup Championship, the Cup Rookie of the Year Award and the Daytona 500.

“It’s a great feeling to return to where it all started for me in the Cup Series,” Kenseth says. “There aren’t many people who have been more influential in my racing career than Jack Roush and Mark Martin. For them to believe in me today means almost as much as it did when they believed in me the first time, 20 years ago. I’m excited to get to the shop, get back to work, and help Roush Fenway return to prominence in the NASCAR Cup Series.

In addition, the Cambridge, Wisconsin native captured the 2004 International Race of Champions (IROC) title and qualified for the NASCAR playoffs in 13 of its 14 seasons. During his celebrated career, Kenseth has 39 Cup Series victories, 181 top-five finishes, 327 top-10 finishes, and 18 pole awards.

Kenseth will share the No. 6 with Trevor Bayne, who has driven the car for the past three seasons, with the exact schedule still in the works.

“We are very pleased to welcome Matt back to Roush Fenway,” team co-owner Jack Roush says. “Matt is one of the guys who really put us on the map of the racing landscape. He’s one of the most talented drivers to ever sit inside a race car and his will to win, drive and determination have always embodied what we strive for as an organization. At the same time, we are very happy to welcome Wyndham Rewards to the fold. It takes a strong partner base to succeed at this level, and we are confident that Wyndham Rewards will be a great addition to our team. We look forward to working with them going forward.”

Wyndham will join longtime anchor partners AdvoCare and Performance Plus on the No. 6 program.