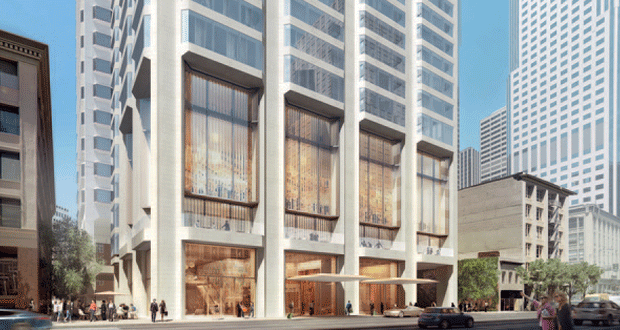 MCLEAN, Va.—Waldorf Astoria Hotels & Resorts has announced its newest property, Waldorf Astoria San Francisco, which will be the centerpiece of a two-million-square-foot, mixed-used complex that will feature luxury entertainment, retail, and office space.

Destined to become the preferred hotel for global luxury travelers, Waldorf Astoria San Francisco will reside within the first 21 stories of a signature tower designed by the architecture firm Foster + Partners. Located at Mission Street between Ecker and 1st Streets, Waldorf Astoria San Francisco will be situated in the city’s exciting new Transbay Neighborhood, in the center of a vast redevelopment project surrounding the Transbay Transit Center.

“With the revitalization taking place around the Transbay Transit Center, this neighborhood is poised to become a major hub for locals and global luxury travelers, which underscores Waldorf Astoria’s commitment of being in the center of coveted gateway destinations,” said John T.A. Vanderslice, global head, Waldorf Astoria Hotels & Resorts. “Waldorf Astoria San Francisco marks our third property in California—behind La Quinta Resort in Palm Springs and the future Waldorf Astoria Beverly Hills. We are thrilled to accept this extraordinary opportunity to extend our unforgettable experiences, the finest amenities, and True Waldorf Service up the West Coast.”

Bordered by Market Street on the north, Embarcadero on the east, Folsom Street on the south, and Hawthorne Street to the west, the Transbay Neighborhood is an inspirational environment unto itself. Transportation friendly with wide sidewalks and bike paths, the neighborhood has a vibrant mix of shops and restaurants, as well as contemporary green spaces which have been carefully planned as key components of the area.

The hotel will offer a spa and will also feature an iconic Peacock Alley serving a San Francisco approach to cuisine and libations.