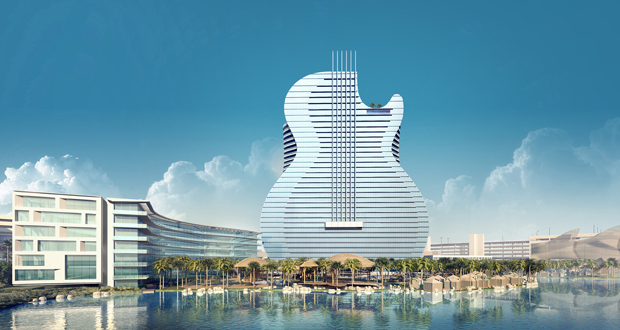 HOLLYWOOD, Fla. –A guitar hotel tower is officially under construction at Seminole Hard Rock Hotel & Casino. Designed to resemble back-to-back guitars, with guitar faces, necks and brightly lit guitar strings that reach 450 feet into the sky on both sides, the Hard Rock guitar tower is part of a $1.5 billion expansion of Seminole Hard Rock Hotel & Casino, Hollywood. It is the flagship destination of the Hard Rock International empire owned by the Seminole Tribe of Florida. The expansion will open in mid-2019 in advance of Super Bowl LIV at nearby Hard Rock Stadium in February 2020.

The giant guitar tower will be the centerpiece of one of the casino complex, which will include a Hard Rock Casino nearly double its current size with 3,267 slot machines and 178 table games such as blackjack and baccarat, plus a new 18,000-square foot poker room. The expansion will also include 60,000 square feet of new retail and restaurant space and a $100 million redesigned and completely rebuilt Hard Rock Live venue with 7,000 seats in a theater-style configuration. 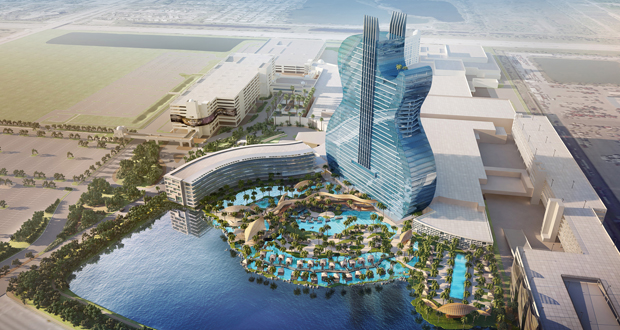 “Our ancestors and elders welcomed curious tourists to our Florida reservations, and today’s members of the Seminole Tribe of Florida will soon welcome visitors from all over the world to what will become a landmark destination,” said Seminole Tribe Chairman Marcellus Osceola Jr. “Our guitar tower will attract global attention.”

“Our talented team of architects and designers have done an amazing job of designing this incredible structure and working to bring it to life,” said Allen. “But it’s our team of dedicated employees and managers at Seminole Gaming who really deserve the credit. They are responsible for the ongoing success of the Seminole Hard Rock Hotel & Casino by helping to lay the foundation to make this expansion project possible.”

At the base of the guitar tower will be a 10-acre pool complex with private villas surrounded entirely by water and waterfalls. The villas will offer luxury accommodations with private plunge pools and butler service. Cabanas will dot the banks of the lagoon-style resort pool, which will also include beach club dining and guest activity options including canoes and paddleboats.

The 5,500-seat Hard Rock Live arena will be razed in March 2018 and replaced with a 7,000-seat Hard Rock Live in a theater-style configuration. Designed by Montreal-based Sceno Plus, one of the world’s leading designers of theatrical venues, the new Hard Rock Live will house its own television studio and broadcast center to produce and televise awards shows and other events. It will also open in mid-2019.