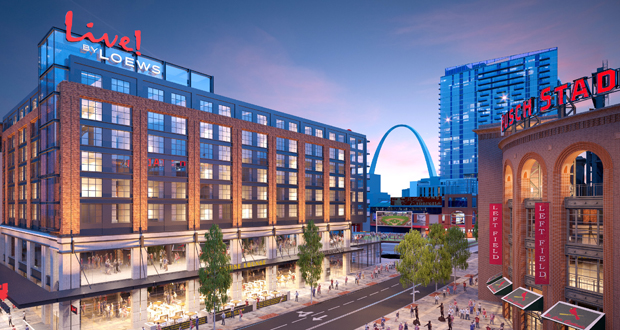 ST. LOUIS, Mo.-Loews Hotels & Co announced plans to build its first St. Louis hotel as part of a $260 million expansion of the city’s mixed-use dining and entertainment district, Ballpark Village. Adjacent to Busch Stadium, the hotel will debut as Live! by Loews – St. Louis, MO, a partnership between Loews Hotels & Co., The Cordish Companies, and the St. Louis Cardinals. The $65 million hotel will bring an upscale hospitality experience to downtown St. Louis.

“Expanding the Live! by Loews name in St. Louis, with partners like The Cordish Companies, the DeWitt family and the St. Louis Cardinals, allows Loews the opportunity to add a unique and immersive hotel into our portfolio,” said Jonathan M. Tisch, chairman & CEO, Loews Hotels & Co. “Cardinals fans are some of the most loyal and best in Major League Baseball, and we look forward to having a hotel in the epicenter of the already successful Ballpark Village.”

The eight-story tower is part of a plan to complete a full build-out of Clark Street. Designed by HKS Architects Hospitality Studio, the exterior architecture and interior design will be influenced by local St. Louis character, including inspiration used for Busch Stadium. The hotel will have 216 luxury guestrooms, including 19 suites as well as 17,000 square feet of meeting and special event space with views of Busch Stadium, downtown St. Louis, and the Gateway Arch. Those events spaces include a grand ballroom with an outdoor deck, an executive boardroom, several breakout meeting rooms, and an expansive, exclusive outdoor event terrace. The Great Room lounge and outdoor terrace will be a gathering place for guests to enjoy food and beverage offerings, private dining options, and a digital AV experience that showcases sports, entertainment, and art.

“We are thrilled to partner with Loews Hotels & Co. on their first St. Louis hotel,” stated Bill DeWitt III, president of the St. Louis Cardinals. “Live! by Loews – St. Louis, MO will be an incredible anchor for Ballpark Village and a tremendous step forward in fulfilling our vision of creating a world-class, mixed-use destination next to Busch Stadium.”

The St. Louis hotel will become the second to carry the Live! by Loews name. The first announced location will open in the heart of Texas’ Arlington Entertainment District between the Texas Rangers’ Globe Life Park and the Dallas Cowboys’ AT&T Stadium, anchoring the $250 million Texas Live! dining, entertainment, and hospitality destination that is a development partnership between The Cordish Companies, the Texas Rangers, and the City of Arlington.