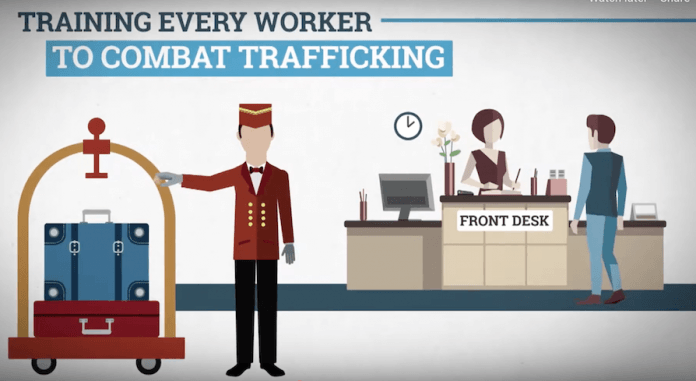 WASHINGTON, D.C.—As part of the hotel industry’s ongoing commitment to combat human trafficking, the American Hotel and Lodging Association (AHLA) launched a public service announcement (PSA) raising awareness about the No Room for Trafficking Campaign, which unites the industry around a single, comprehensive approach to fight human trafficking.

“In the fight against human trafficking, the hotel industry is united in our commitment to being part of the solution,” said Chip Rogers, AHLA president and CEO. “By taking action to provide human trafficking awareness training for our employees and the sharing of hotel industry best practices, we hope to serve as an example for other industries, while finding new opportunities to partner across the tourism sector and those joining us in this important fight.”

Hoteliers play an important role in combating trafficking through raising awareness, improved coordination with law enforcement, and ongoing workforce education and awareness. Already each year, tens of thousands of hotel employees are trained on how to identify and act to stop instances of human trafficking. With this campaign and day of action, AHLA builds on the industry’s record by convening the entire sector with the goal of training every hotel worker.

Day of Action in Washington, D.C.

AHLA kicked off the day of action in Washington, D.C., by partnering with ECPAT-USA to host a human trafficking prevention training session for local hotel employees at the Hyatt Regency Washington on Capitol Hill.

Additionally, as part of the campaign, AHLA developed an action plan for hoteliers to implement, including staff training on what to look for and how to respond; displaying human trafficking indicator signage; establishing a companywide policy; ongoing coordination with law enforcement; and sharing success stories and best practices.

AHLA will also host a series of regional events throughout the year leading up to Human Trafficking Prevention Month in January, to raise public awareness and facilitate collaboration with policymakers, law enforcement, and hoteliers on best practices for policies, procedures, and training to enhance human trafficking prevention efforts.

ABOUT US
LODGING is the Official Publication of the American Hotel & Lodging Association (AHLA)
FOLLOW US
© Copyright 2021, Lodging Media, All Rights Reserved.
MORE STORIES
AHLA