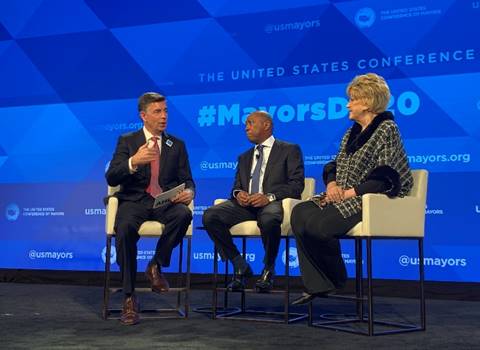 Washington, D.C. — On January 23, the American Hotel & Lodging Association (AHLA) led a national dialogue with hundreds of mayors around the country to advance solutions to stop human trafficking in hotels. President and CEO Chip Rogers hosted a panel at the U.S. Conference of Mayors’ 88th Winter Meeting to explore the coordination between the hotel industry and mayors as they partner to deploy targeted strategies and take action to combat trafficking in cities across the country.

This event builds on efforts throughout National Human Trafficking Awareness Month and AHLA’s No Room for Trafficking campaign, which aims to train every hotel employee to spot the signs of trafficking and ultimately save lives. As part of this month’s awareness activities, AHLA is convening the broader travel community to help raise awareness around this issue.

The panel, which featured remarks from Houston Mayor Sylvester Turner and Las Vegas Mayor Carolyn Goodman, focused on the efforts of their respective cities and ways local governments are coordinating with hoteliers to develop tools and facilitate increased collaboration across the private and public sectors.

“We know that eliminating human trafficking takes coordination and collaboration across all sectors and all levels of government. Through partnerships with leaders like Mayor Turner and Mayor Goodman, the hotel industry will continue to make a meaningful difference in the fight to end human trafficking. We are grateful for their leadership, and the leadership from mayors all over the country on this issue that impacts more than 40 million people globally,” said Rogers.

“In Houston, collaboration and partnerships have redefined our great city from a hub for trafficking to a national model for successful anti-trafficking programs. This is a testament to what happens when government and the private sector work together, and I encourage all industries to follow the hotel industry’s leadership,” said Mayor Turner. “In the fight to end human trafficking, this joint effort is how our country will move forward and continue to save lives.”

“Human trafficking is among the fastest-growing crimes in the country and comprehensively addressing this issue takes coordination and leadership,” said Mayor Goodman. “As a major destination for tourism, I understand how vital it is for government and industry to work in tandem, and I commend the hotel industry for convening this critical conversation and taking the lead on such an important issue.”

AHLA kicked off National Human Trafficking Awareness Month in Miami in partnership with the Asian American Hotel Owners Association (AAHOA) and the Florida Restaurant & Lodging Association (FRLA), with a half-day summit featuring key stakeholders and a training of hotel employees ahead of Super Bowl LIV.

AHLA is continuing to leverage the power of the sports industry with a regional event and employee training in Chicago with the Illinois Hotel & Lodging Association (IHLA) to raise awareness before the NBA All Star Game. Looking further into 2020, AHLA will be highlighting the industry’s on-going efforts with targeted events across the country including Massachusetts, Arizona, Nevada, Delaware, California, Rhode Island, Maryland, West Virginia, and more.