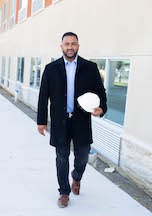 Fresh out of college in 2010, Mitesh (Mike) Jivan was on the verge of beginning a job at Tesla, when he decided instead to join his brother Alpesh to work in and eventually take over their father’s hospitality business. The brothers, who are now co-founders and managing partners of Ten Seventy Hospitality in California, have built a thriving business, which operates Jivan LED Lighting, as well as hotels. However, in the wake of the pandemic, they became part of another enterprise entirely, Hospitality Strong, a grassroots movement to rally the hotel industry to donate PPE across the nation. Jivan described for LODGING how the group of 12 longtime friends from eight hospitality companies banded together to show that their industry is about much more than hotel room rentals.

Jivan explains how the brothers’ management company, which was named for the street number of their family’s first hotel, began branching out even before the pandemic. “We first opened a restaurant at one of our properties just to test our limits, and then ended up in the import business after locating and sourcing lighting that met our needs, then doing government contracts for that and other products people wanted.”

Jivan recounts the dilemma he and a group of fellow second-generation hoteliers were discussing on their regular group chat. “We were just looking for ideas on how to stay in business during the pandemic because everyone was struggling. At Ten Seventy, we pivoted our entire business model from tourism to local business from county officials—first responders, hospital staff, to veterans, all those people who were in dire need of housing. At that time, we weren’t making any money from room rentals anyways, so we pretty much opened up our building to the county and let them basically take over our hotel.”

Yet, despite their challenges, early in the pandemic, he and his group chat friend agreed they were fortunate to be a position to help others—both financially and logistically. “We were all well off and could use our connections in the hospitality industry to start something to give back. So, the 12 of us from eight companies raised $10,000 and set a goal of getting 25,000 masks and donating them to local hospitals and the public health department in our respective areas.”

To expand their reach, the young hoteliers used their social media skills to help rally the troops. “We started gathering more hospitality professionals, first calling them, then also posting online. Once we posted online, we got an outpouring of people who were looking to donate and ended up being able to place an order for 200,000 masks; then slowly, it just expanded and expanded and expanded.”

Jivan says providing PPE during the pandemic, which will eventually pass, marks the beginning of their vision to be a long-term resource for their communities. “Our goal wasn’t just to donate masks. Our goal was to create a network of a hotel owners or hospitality professionals that were prepared to respond to any kind of crisis, giving their time and effort, not just funds. We thought Hospitality Strong would provide a way for these hospitality professionals to work together.”

The group is now expanding beyond the original 12 representing California, Oregon, Washington State, and Texas, including California Lodging Association Chairman Bijal Patel and AAHOA treasurer Neal Patel from Texas, and has been embraced by hotel companies including Red Lion.

Jivan admits that the group made up of second-generation hoteliers from the Leuva Patidar Samaj (LPS) community was initially focused on their common business goals. “We used to get together at events, knowing our ultimate goal was to increase our portfolios.” However, in creating Hospitality Strong, he says, their goals are more ambitious. “What began mainly as a network of friends with a shared heritage has become a community capable of leveraging our connections to respond to crises, so now, if anything comes up, we know where to go.”

Most of all, he says their example shows just how much a small group of individuals can impact the industry. “We are now trying to show our commitment to our respective communities and will be seeking other opportunities to develop initiatives within them while also serving as a resource to help others in our network.”

Already. the Jivan brothers themselves have donated 5,000 N95 masks and more than 50,000 surgical masks to their local hospital and public health department; Hospitality Strong overall has donated upwards of 750,000 pieces of PPE across the nation.