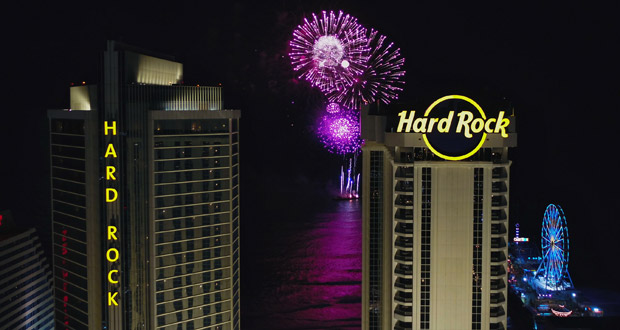 ATLANTIC CITY, N.J.—Hard Rock Hotel & Casino Atlantic City opened its doors last week on the Atlantic City Boardwalk. The 17-acre property welcomed the public with the brand-famous guitar-smash, which included a star-studded line-up of celebrity guitar smashers, ranging from Black Panther star, Michael B. Jordan to singer/songwriter of “Gold,” Kiiara. The hotel and entertainment destination has a casino with 2,200 slots and 120 table games and more than 20 concept-based restaurants, lounges, and premier entertainment venues–Hard Rock Live at Etess Arena and Sound Waves.

“This was a historical day for both Hard Rock and Atlantic City and we’re thrilled to welcome brand enthusiasts, locals, families, and music lovers with open arms to experience our one-of-a-kind offering,” said Jim Allen, chairman and CEO of Hard Rock International. “We are grateful for our partners, and together, we completed the more than $500 million renovation in record time.”

Hard Rock Hotel & Casino Atlantic City is a driving force behind the revitalization of Atlantic City with the hiring of more than 2,000 construction hires and 3,800 employees, dedicated to delivering world-class service to guests of the hotel, casino, restaurants, Rock Spa & Salon, and more.

The property’s music-inspired contemporary design has 2,000 guestrooms and suites, as well as amenities, including the Rock Spa & Salon, Body Rock Fitness Center, 150,000 square feet of meeting space, retail offerings, The Sound of Your Stay music amenity program, and the Rock Shop, featuring Hard Rock merchandise and an array of classic music memorabilia.

The property has more than 20 delectable food and beverage offerings, including Council Oak Fish, a seafood restaurant highlighting the Northeast’s freshest catch; Sugar Factory, which makes its Hard Rock debut in Atlantic City with its floor-to-ceiling candy wall; and Kuro, which features contemporary artisanal dishes using locally sourced and imported ingredients directly from Japan and Sòng serves up dishes from all regions of China.

Before hitting the road, guests can fuel up for their next adventure at RockTane Gas & Wash, a gas service station and car wash that offers members discounts and rewards.