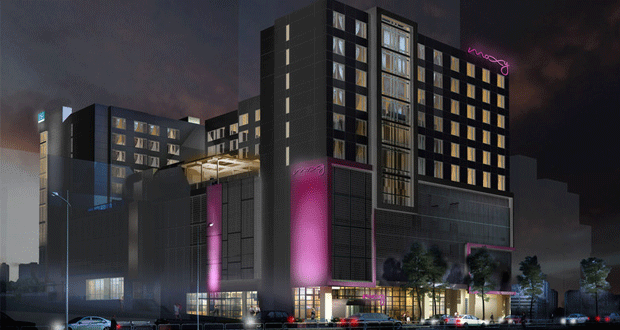 ATLANTA—Marriott International and Noble Investment Group have celebrated the groundbreaking of what will be Marriott’s first-ever combination of an AC and Moxy under one roof. The $70 million, five-story hotel project will rise on a full city block in Midtown Atlanta, one of America’s most dynamic business districts and a regional epicenter for music and arts. The hotel is expected to open in the middle of 2018.

“Midtown Atlanta is the perfect place to debut this visionary, two-in-one lifestyle hotel, which will become a go-to destination for both business and leisure travelers,” said Tony Capuano, Marriott’s Executive Vice President and Global Chief Development Officer. “We’re thrilled to be working with our great partners at Noble to launch these exciting brands in dynamic markets throughout North America.”

Both hotels will have distinct hospitality experiences inside and will share a deck-top amenity level that will contain shared meeting space with outdoor break-out space, health and fitness and a rooftop pool and bar with outdoor fire pits.

As part of this project, Noble will also help establish the missing link in an extensive pedestrian connector. To be called the Arts Walk, the ground-level path will provide direct access for hotel guests and local residents to walk from 14th Street to the lively Crescent Avenue entertainment and dining district, to the more than 20 million square feet of corporate office and the world-renowned Woodruff Arts Center along 15th Street. The connector will eventually stretch from the Woodruff Arts Center to high-speed public transportation at the 10th Street MARTA station.

“We are proud to continue to expand upon our more than 20-year partnership with Marriott with our development of the first, dual-branded AC Hotel and Moxy Hotel in the world,” said Mit Shah, Noble CEO. “Midtown Atlanta has become one of the best live, work, learn, stay, shop and play communities in the United States and we are excited to bring these iconic new lifestyle brands to our hometown.”

Midtown Atlanta is home to more than 24,000 students who attend Georgia Tech University, Savannah College of Arts and Design and Emory University Hospital. Midtown Atlanta attracts over 6.1 million tourists annually primarily driven by its arts and entertainment offerings and is home to 16 percent of the total jobs in Atlanta, 25 percent of the city’s professional jobs and a fast-growing residential population that is 75 percent Gen X and Millennials.

Atlanta is ranked among U.S. News and World Report’s 2017 Best Places to Live, noting the Georgia capital is among the nation’s fastest-growing cities. NerdWallet ranked Atlanta No. 6 on a list of the Best Cities for Job Seekers in 2017.