CHICAGO — Aparium is an upscale, full-service brand that has opened eight independent hotels, including Crossroads Hotel in Kansas City, Cyrus Hotel in Topeka, Kan., Detroit Foundation Hotel in Detroit, The MC Hotel in Montclair, N.J., and Hewing Hotel in Minneapolis. Now, the company is doubling down on its future with a pipeline of six new hotels to open by early-2022. Aparium hotels in Des Moines, Iowa, and Tampa, Fla., are set to open in 2020; hotels in Birmingham, Mich., Fargo, N.D., and Denver, Colo., are slated for 2021; and a hotel in Alexandria, Va., will follow in 2022.

Aparium founders Kevin Robinson and Mario Tricoci met a decade ago when they launched the Elysian Hotel on Chicago’s Gold Coast, which Hilton later acquired in 2009. “We opened the Elysian in the worst days of the recession, so that prepared us for anything,” Tricoci said.

When the duo decided to create a new kind of hotel company, Robinson and Tricoci set their sights on cities often referred to as “secondary markets.” While developers are increasingly considering these cities, Aparium was among the first independent hotel groups to pursue opportunities in these destinations. “As we traveled, we were wowed by the incredible culture and character of these places, but disappointed to see them saturated with branded hotels,” Tricoci said. “We decided to turn the conventional development formula inside out. Instead of imposing a brand on a city, we’d harness a city’s spirit and stories to build singular hotels with a native soul, and they in turn would form the Aparium brand.”

Robinson, a former Four Seasons Hotels executive, continued, “Guests are no longer interested in generic brand experiences,” he said. “Like travelers themselves, our teams explore the people, flavors, and stories that make a city surprising, and express that sense of place through our properties. Each hotel should make you curious about its home city.”

Every Aparium hotel is designed to feel original and genuine—what the brand calls “translocal hospitality.” Rather than impose identical guidelines for its hotels, the company starts each project as a blank slate. Building a hotel means exploring a city, learning its stories, and getting to know its people.

“Inspired by our host cities, we cultivate loyal, local followings by delivering communal experiences unique to each location,” Tricoci said. “Our hotels, restaurants, and bars are authentic crossroads where travelers and locals linger in each other’s company, creating a remarkable confluence of cultural color.”

When Aparium enters a market, its team talks to a diverse range of locals with deep connections to their city—from investors, architects, and designers to artists, makers, creatives, and influencers. A tattoo artist Robinson and Tricoci met in Kansas City ended up designing the body-art-inspired wallpaper for the Crossroads Hotel’s guestrooms; Aparium tapped local interior design firm MartinPartrick3 Studio for Hewing Hotel’s rooftop lounge with an adjacent sauna and cold plunge pool—a nod to the Scandinavian culture prevalent in Minneapolis.

There’s a story behind each Aparium hotel’s name: The Hewing was inspired by the act of chopping lumber and refining its appearance—a nod to the giant pine beams that abound in the interior of the hotel—and, in Memphis, the Hu. Hotel channels the spirit of legendary local Hugh “Hu.” Lawson White Brinkley, who put Memphis on the map as a shipping hub.

“Each hotel is born out of at least two years of detailed communication, relationships, collaborations, and inspirations,” Robinson said. “Stories people have shared with us about each location encourage what we name the hotels and what we name their restaurants and bars.”

Historic preservation and adaptive reuse are also key to Aparium’s story—the company chooses architecturally meaningful buildings that are significant to local communities. In Kansas City, Aparium transformed the landmark 1911 Pabst and Pendergast buildings into the Crossroads Hotel; and Aparium transformed the former Detroit Fire Department headquarters and adjacent Pontchartrain Wine Cellars building into the Detroit Foundation Hotel with a wooden wall in each guestroom repurposed from wood from the former firehouse.

By the end of 2021, Aparium plans to open six new hotels, each of which will embody its respective city’s character, culture, and history.

Scheduled to open on September 24, 2020, Hotel Haya is an adaptive reuse of two buildings combined with a new build. Designed by Alfonso Architects Incorporated  to capture the Cuban, Italian, and Spanish influences of Tampa’s Ybor City neighborhood, the property evokes the 1950s Golden Age of Havana. “Mid-century Cuban” guestrooms will include period fabrics and colors, along with locally made glass bulbs that pay homage to Ybor’s streetlights. Other elements include exposed brick walls, a large neon “HAYA” sign, and classic art, including four Goya reproductions. Dining will include Flor Fina, which will serve “coastal Mediterranean meets Gulf Coast” cuisine, and Quiquiriqui, a Cuban cafe and neighborhood gathering spot that translates as “the call of the rooster.” With 178 rooms, Hotel Haya will become the largest property in Aparium’s portfolio. 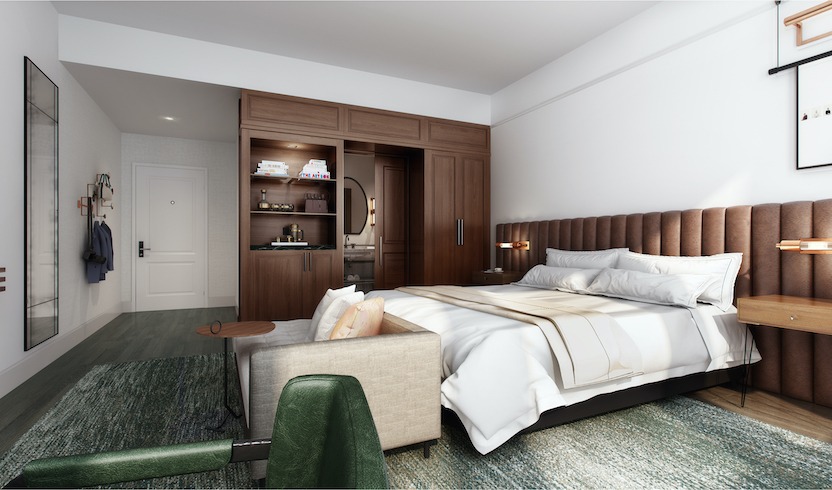 Scheduled to open on October 14, 2020, the 138-key Surety is designed to evoke the heritage of banking and finance in Des Moines. Led by Slingshot Architecture and designed by DLR Group, the hotel is an adaptive reuse of the circa-1914 Beaux-Arts Hippee Building —once Iowa’s tallest—and has original plastered coffered ceilings and ornate mail chute down the building’s entire length. The Surety will display rotating exhibitions of specially commissioned work, like Julia Franklin’s “dress shirt” made of waxed 1920s banking documents. The standout piece in guestrooms will be an ornate armoire that will contrast with minimalist furniture and original wood floors. Dining space will include Mulberry Street Tavern. 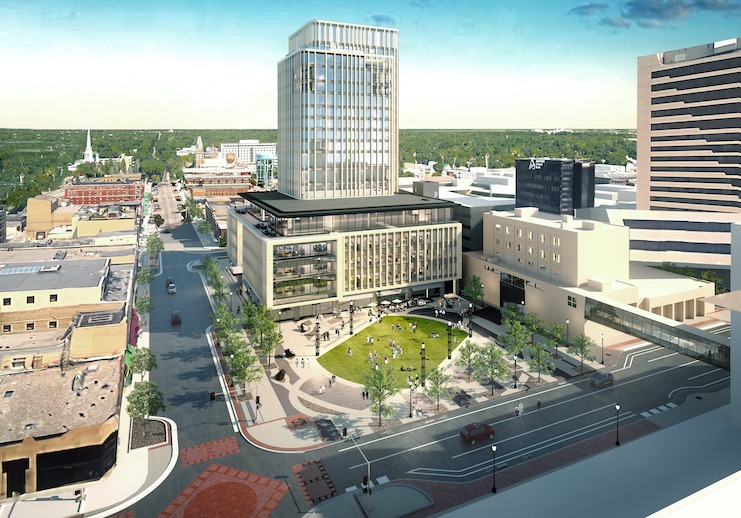 Built into a newly constructed, mid-rise, mixed-use tower and designed by ESG Architecture and Design, Jasper Hotel will introduce 125 rooms in Fargo’s downtown in January 2021. The hotel’s restaurant, Rosewild, will offer “around the hearth” plains-inspired cuisine for up to 54 guests, with rustic Nordic dishes and ingredients as a nod to the Norwegian heritage of North Dakota’s initial settlers who arrived in the 1800s. The bar will serve classic cocktails with Nordic-midwestern touches such as garnishes of spruce, anise flavors, and market ingredients. The property will also include a ground-floor coffee bar. The hotel will incorporate arts and culture through partnerships and programming with local makers, designers, and innovators. 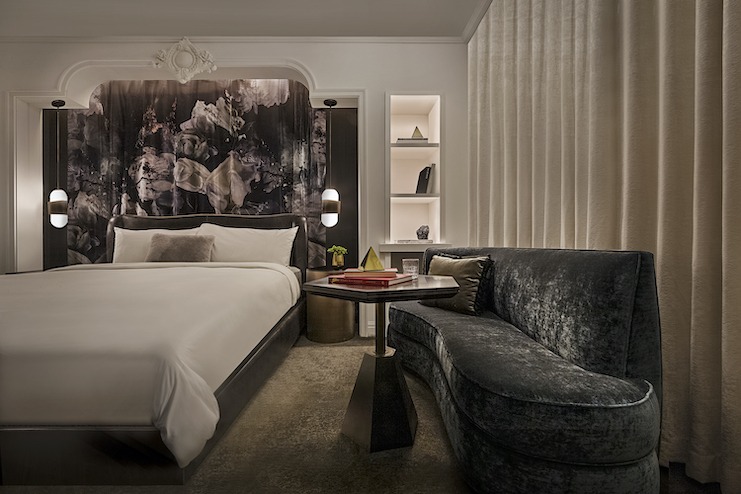 Scheduled to open in January 2021, the 151-key Daxton will be the poshest property in Aparium’s portfolio and is designed to bring a new vision of modern luxury to Birmingham, Michigan—just 30 minutes from Detroit. The new building on the city’s main drag is designed by firm Simeone Deary and will include art curated by Saatchi Art. Glass walls and avant-garde furniture will frame public areas. Color will flood spaces throughout the hotel, like a chartreuse lobby, deep-burgundy guestrooms, lavender parlors. Madam, the hotel’s dining space, will serve “enlightened American” fare under greenery hanging from high ceilings reflected in wood floors.

Aparium also plans to open The Clayton in Denver’s Cherry Creek neighborhood in March 2021, and Hotel Heron in Alexandria, Va., is slated for a mid-2022 opening.