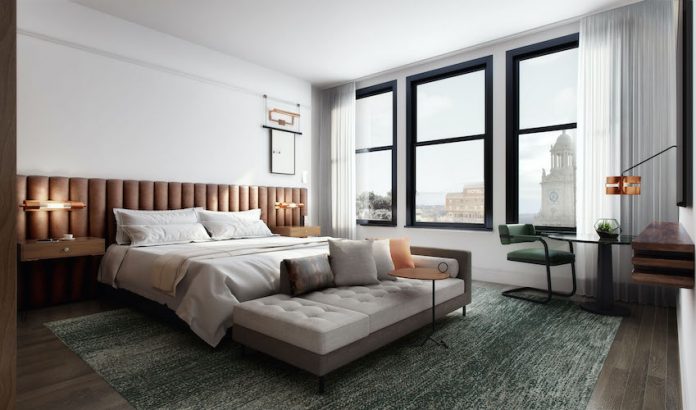 An adaptive reuse of the historic century-old Hippee building, the 137-key hotel marks a revival of a Beaux-Arts Classicism-style architectural landmark built for The Iowa Loan & Trust Company in 1913 as Iowa’s tallest building at the time. The hotel is named after a surety bond and will honor its namesake by “guaranteeing unparalleled service, high design, and exceptional food and beverage for travelers and locals alike.”

“In its entirety, Surety Hotel is a tribute to our beloved city,” said Allison Streu, the hotel’s general manager. “Nearly every aspect of the design and programming celebrates Des Moines and helps to shine a light on our neighbors who make the district so special.”

Slingshot Architecture and DLR Group’s interior design preserved many of the building’s historical features, from the 12-story main staircase to the ornate mail chute that runs down the structure’s entire length. They also maintained the bank space on the main level, including original vault doors. Evoking the city’s heritage of banking and finance, the hotel’s interiors are outfitted in marble, hand-applied artisan plaster, hardwood millwork, leathers, and metals reminiscent of the coins that previously passed through in exchange.

“In honoring the architecture while also making what is new feel appropriate to the old, we have brought the space back to life and returned it to its former glory,” said David Voss, principal at Slingshot Architecture.

The large, open lobby, serves as the hotel’s “living room,” with original vaulted coffered ceilings and ground-glass skylights. In the lobby lounge, a daytime coffee parlor will transform into an evening destination for cocktails and wine. 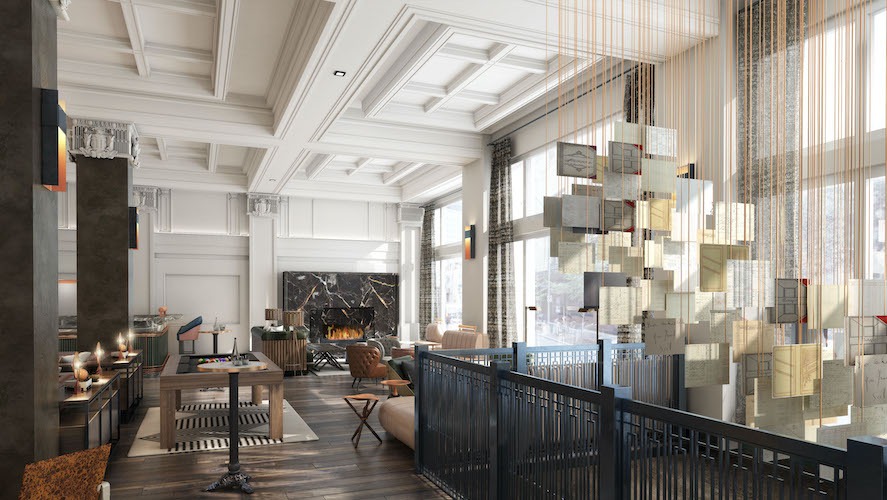 “Paying homage to the building’s roots in financial transactions, we aimed to foster communal and social transactions through our design,” said Staci Patton, principal at DLR Group and interior design director for the project. “We played into the artistic backbone of Des Moines to bring the community together with a design that embraces over 28 original works of art by local Iowan artists.”

Surety Hotel’s Beaux-Arts facade is complemented with renewed present-day interiors, with a 1920s businessman serving as a design muse. Inspired by the fashion of guests during that era, the color palette includes cognac brown hand-applied suede plaster walls, green and burgundy leather furnishings, heathered tweeds, and copper, zinc, and black accents. With original maple wood flooring and natural light streaming through large windows, guestrooms were simply designed in contrast to the richness in architecture of the bank building. The bathrooms’ marble hexagon tile flooring harkens back to the building’s original design and includes a forest-green-tiled accent wall in the glass-enclosed showers. In addition to the 126 guestrooms, nine corner studios overlook the county courthouse, which is listed on the National Register of Historic Places. The Marchande Suite, the hotel’s presidential suite whose name nods to the building’s French influence and banking past, has a large living room space, kitchenette, and bar. 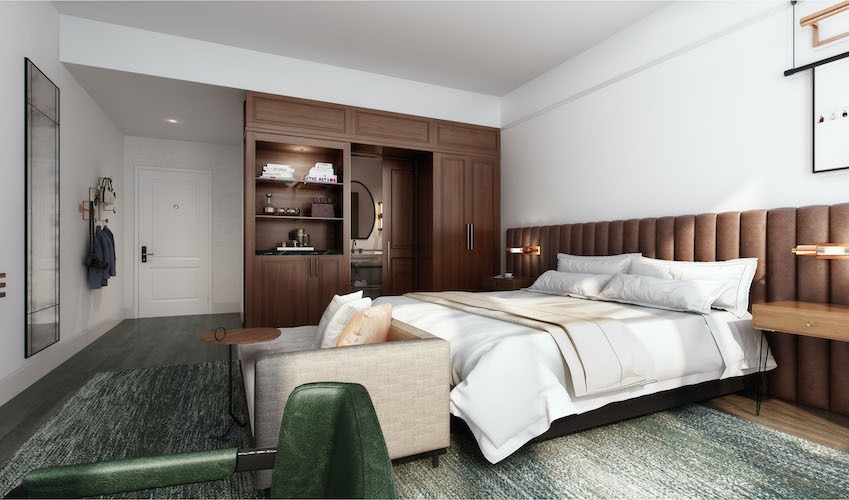 Executive Chef Marque Collins is leading the hotel’s culinary program, headlined by Mulberry Street Tavern. The entirety of the Mulberry Street Tavern menu is locally inspired, including its bar program. The restaurant dining area has a hand-fired copper metal cookline visible from the Mulberry sidewalk. The bar design also includes additional crafted finishes with a wood and stained glass back bar. Courtyard seating is set to debut in 2021.

As with all Aparium properties, Surety Hotel embraces what the brand calls “translocal hospitality.” The property worked closely with the surrounding area’s designers, artists, and other tastemakers and entrepreneurs to infuse the property with local flair. Coffee and tea by BLK & Bold, which donates a percentage of all profits back to youth programs, will be served in custom ceramics from Alfar Pottery. Charcuterie at Mulberry Street Tavern will be served on hand-carved boards by local artisan DamonLayne Woodworking. Small-batch soy candle company Currently Co. created a signature scent for the hotel, with tailor-made candles available for purchase in the lobby.

Just outside the doors of Mulberry Street Tavern is a 2,220-square-foot courtyard showcasing a neon sign that reads “City of Certainties”—after Des Moines’ early 20th-century nickname—handcrafted by the last neon vendor in Iowa. The courtyard, along with the ballroom and two other spaces, make up Surety Hotel’s 6,700 square feet of indoor and outdoor meetings and event space. The property also has a 24-hour fitness center.

Surety Hotel is one of six properties that Aparium Hotel Group plans to open by early-2022.