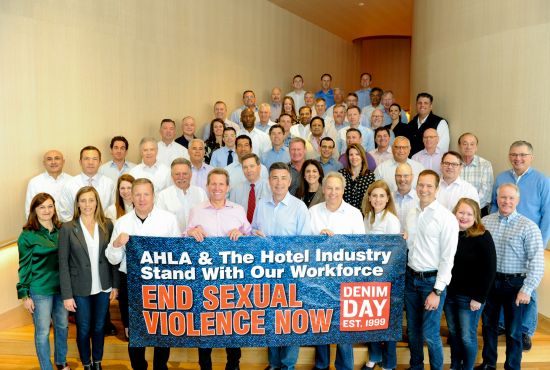 WASHINGTON, D.C.—In honor of Sexual Assault Awareness Month this April, the American Hotel and Lodging Association (AHLA) is launching a month-long campaign along with member companies and national partners to raise public awareness about sexual assault and reaffirm the hotel industry’s commitment to providing a safe and welcoming environment for all employees and guests.

On Tuesday, AHLA’s 2019 Board of Directors launched this campaign by uniting against sexual violence, publishing a paid open letter in The Wall Street Journal and wearing jeans at its board meeting as part of a social media movement ahead of Peace Over Violence’s Denim Day on April 24.

The open letter in The Wall Street Journal noted the industry’s long-standing commitment to raising awareness of sexual violence and providing hotel operators with new trainings, tools, and resources to educate employees on identifying and reporting sexual harassment and assault.

AHLA is an official sponsor of Peace Over Violence’s Denim Day activities on April 24, and will join millions of individuals to wear jeans for the purpose of supporting survivors and educating others about all forms of sexual violence. AHLA’s donation will allow Peace Over Violence to continue to lead and expand critical violence prevention education campaign throughout the Los Angeles metro area.

AHLA also participated in Raliance and the National Alliance to End Sexual Violence’s Sexual Assault Awareness Month Policy Briefing on April 3 to educate Congressional staff on the 1500 local agencies that provide the frontline response to the widespread and devastating problem of sexual assault in our communities.

“Safety is a never-ending challenge, and the hotel and lodging industry is committed to working with safety experts to continuously update protocols and procedures to better address the needs of employees, while also ensuring a safe environment for workers and guests,” said Chip Rogers, AHLA president and CEO. “This April, we look forward to working with our national partners, such as Peace Over Violence and National Alliance to End Sexual Violence, this month and into the future to help end sexual violence.”

“We commend the American Hotel and Lodging Association for their efforts to raise public awareness about sexual violence prevention and the important role that the hotel and lodging industry plays in promoting respect, safety, and equality for all employees and guests,” said Monika Johnson Hostler, RALIANCE Managing Partner and President of the National Alliance to End Sexual Violence. “It will take the commitment from partners in every industry to create workplaces free from sexual harassment, misconduct, and abuse and we encourage other business and industry leaders to also champion this message throughout Sexual Assault Awareness Month in April and join us in the fight to end sexual violence in one generation.”

“The success of the Denim Day campaign is due in large part to the support of our partners, partners like AHLA,” said Patti Giggans, executive director of Peace Over Violence (POV) and founder of Denim Day. “Peace Over Violence created the campaign in order for people around the world to actively engage their own communities to bring awareness about sexual violence and its impact. The sponsorship of AHLA enables POV to continue to reach people across the world with sexual violence awareness, demonstrating what it means to support survivors, and providing critical healing services and violence prevention programming to communities. If we want to see an end to sexual violence it’s going to take all of us, that’s why are so grateful for the commitment AHLA has made to survivors through Denim Day during Sexual Assault Awareness Month.”

Last year, AHLA joined nearly 20 major hotel brands in membership on September 6 to announce the 5-Star Promise, a pledge to provide hotel employees across the United States with employee safety devices (ESDs) and commit to enhanced policies, trainings, and resources that together are aimed at enhancing hotel safety, including preventing and responding to sexual harassment and assault.

Across the industry, numerous resources and training tools for hotel employees are being implemented with various engaged partners like Polaris, ECPAT-USA, the Department of Homeland Security’s Blue Campaign, and more. Every year thousands of employees are trained to spot and help stop trafficking incidences.