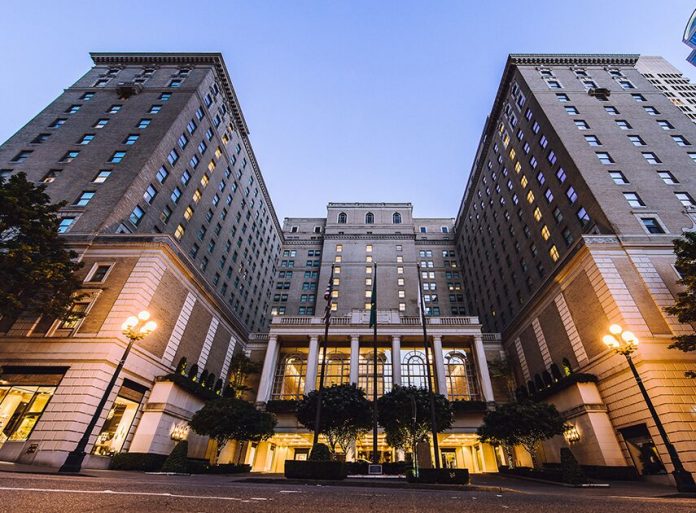 Publick House Historic Inn (1771) Sturbridge, Massachusetts
Hotel fun fact: Since 1771, the Inn has been the hub for esteemed visitors, such as George Washington, Benjamin Franklin, and General Lafayette to present day travelers.

Inn at Willow Grove (1778) Orange, Virginia
Hotel fun fact: During the Revolutionary War, Generals Wayne (Georgia) and Muhlenberg (Pennsylvania) camped at Willow Grove during the southern campaign to assist Marquis de Lafayette in forcing the British to surrender. Inn at Willow Grove was listed in the National Register of Historic Places in 1979 and the Virginia Landmarks Register in 1978.

The Sherman (1852) Batesville, Indiana
Hotel fun fact: German J. Brinkmann built his hotel in 1852, naming it in 1865 to honor General Sherman and the 83rd Indiana Volunteer Infantry, who served with Sherman in the Civil War.

Penn Wells Hotel (1869) Wellsboro, Pennsylvania
Hotel fun fact: The Philadelphia Inquirer called it “the gem of the Roosevelt Highway.” During World War II, Corning Glass works, the predecessor to today’s Corning Inc. celebrated its Christmas party at the hotel, and in appreciation, presented the iconic American Flag made of 1,438 Christmas ornaments which can be seen today in the lobby.

Antrim 1844 (1844) Taneytown, Maryland
Hotel fun fact: Antrim 1844 has close ties with Gettysburg. During the Civil War, General Meade stayed on this historic property on the night of June 30, 1863.. He had been the Commander of the Army of the Potomac for only two days before fighting erupted. General Meade went on to defeat Robert E. Lee at Gettysburg and earned notoriety as one of the most important commanders of the Civil War.

Hotel Skyler Syracuse, Tapestry Collection by Hilton (1922) Syracuse, New York
Hotel fun fact: The building’s original use was a synagogue and most recently was home to the theatre group Salt City for the performing arts.

Fairmont Olympic (1924) Seattle, Washington
Hotel fun fact: In 1924, The Seattle Times held a contest offering $50 for the best name: 3,906 entries were submitted, and 11 entries included one name, The Olympic, which was selected.

Sofitel Washington D.C. Lafayette Square (1925) Washington, D.C.
Hotel fun fact: In the early 1800s, the site was one of Washington’s most prestigious hotels and was home to President Andrew Johnson as well as Woodrow Wilson before his inauguration.

The Queensbury Hotel (1926) Glens Falls, New York
Hotel fun fact: Robert F. Kennedy promised to return to the Glens Falls region after the 1964 election for Senator. The day after he won, he attended a luncheon at the hotel.

Hotel Saranac, Curio Collection by Hilton (1927) Saranac Lake, New York
Hotel fun fact: An iconic landmark in the Saranac Lake village, the hotel has been thoughtfully restored and renovated while maintaining its historic charm and fascinating architecture – including the Great Hall, inspired by a 14th-century Italian palace.

The Statler (1956) Dallas, Texas
Hotel fun fact: The Statler hosted many popular entertainers in its past, including Elvis Presley. The Statler in Dallas was originally built by The Statler Hotels Company (founded in 1907). Other former Statler hotels inducted into Historic Hotels of America in prior years include Boston Park Plaza, Omni William Penn, and The Capital Hilton Washington DC.

Alpenhof Lodge (1965) Teton Village, Wyoming
Hotel fun fact: The Alpenhof Lodge was listed in the National Register of Historic Places in 2016. Alpenhof, the first lodge built in Teton Village, preserves its Bavarian-heritage style similar to those in many Alpine ski resort destinations.

Six of the historic hotels are adaptive reuse projects that have involved converting some or all of a historic building to a hotel. Originally, these structures were built for another purpose in their history, including a synagogue, a cotton warehouse, a furniture factory, office building, a manor house, and school house.

“Each of these legendary historic hotels has contributed to our nation’s history,” said Lawrence Horwitz, Executive Director, Historic Hotels of America and Historic Hotels Worldwide. “Each is unique and has a history worth exploring and experiencing. We are delighted to recognize these wonderful historic hotels. We applaud their community leaders, owners, management, and associates for making these hotels excellent examples of historic preservation and for being great stewards of the stories about world leaders, celebrities, and other luminaries who stayed in these hotels or were involved in the original use of these historic icons.”