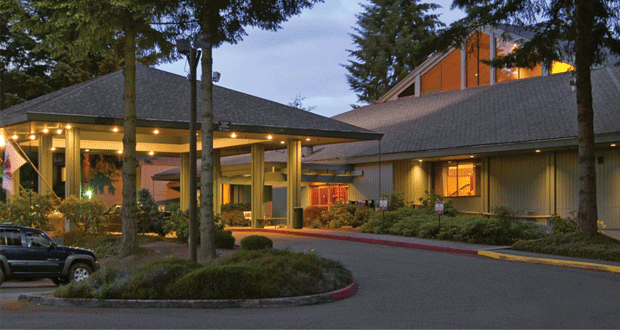 OLYMPIA, Wash.—RLHC (Red Lion Hotels Corporation) has announced the opening of Hotel RL Olympia. The hotel was built in 1969 and has undergone a multi-million dollar transformation to be rebranded as a Hotel RL. Hotel RL Olympia is the first of five Hotel RLs scheduled to open this year and the third to launch since the brand’s first opening last August.

“The Hotel RL brand DNA is consistent with Pacific Northwest values, which makes us especially delighted to open Hotel RL Olympia in the heart of Washington’s state capital,” said RLHC Chief Marketing Officer, Bill Linehan. “The Living Stage, a unique feature to Hotel RL, located in the hotel’s open pavilion-style lobby, is an exceptional venue for people to share their creativity, innovation or spread awareness about their passions during scheduled performances. This feature caters to local artists from all walks of life and benefits the community as well as overnight guests—it’s a lively concept that has been very well received.”

“The Living Stage is one of a series of spaces, experiences and amenities at Hotel RL especially suited to travelers seeking more than just a hotel room,” Linehan added. “Hotel RL offers spaces for business and leisure travelers to immerse themselves into local culture, while maintaining their connection to the world.”

Hotel RL Olympia will also continue the brand’s charitable awareness campaign, Project Wake Up Call, which focuses on aiding the homeless in each city that a Hotel RL is located.